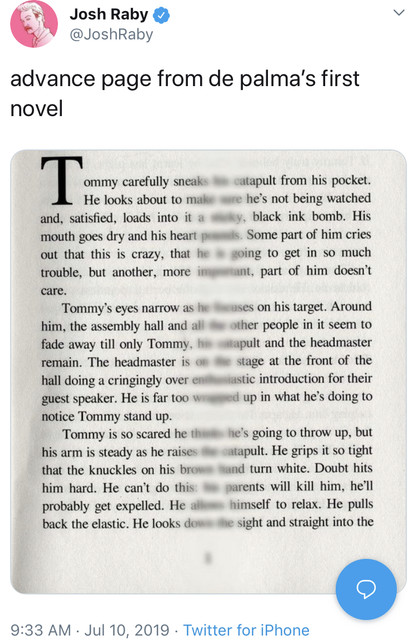 Based on an un-filmed concept about a John Edwards-like politician.
Top

De Palma has talked a little to Reuters about his proposed Harvey Weinstein-inspired thriller.
Top

De Palma hopes to make Pimento (?), based on a classic film noir.
Top

Considering this is late-era De Palma, I'm expecting this to be less than piquant.
Top

Ummmmm... under what circumstances could it be any other era? Provided that you see time as linear, etc
Top

It turns out it's a remake of Palmetto.
Top

Literal LOLs. Here's my writeup of the original from the Noir thread

domino harvey wrote: ↑
Mon Jun 15, 2015 11:20 am
Palmetto (Volker Schlöndorff 1998) Tonally wonky and inspired more by 80s interpretations of noir than the real thing, this nevertheless has some component parts that work. Woody Harrelson plays one of the dumbest noir protagonists ever, and the film to its credit doesn't confuse his almost non-stop stream of mistakes and idiocies for anything other than what they are. It's no surprise that the source novel was called Just Another Sucker, because for a former reporter, Harrelson does everything wrong. The two female leads seem miscast and should have been switched: Elizabeth Shue plays the sexually voracious bad girl and Gina Gershon is the stay at home supportive good girl? Are you sure that's the choice you want to make here, movie? Though, to be fair, Shue overcompensates hilariously (intentionally so) by making her erotic come-ons so overblown and florid that at one point she mounts a wall and presents herself in a gloriously tasteless sequence that is one of the few moments the film really embraces its utter silliness. And the kidnapping plot at the heart of the film is dopey and predicated on Harrelson being as dumb as possible, which, based on the evidence, made it a safer bet than most convoluted noir plots!

I can imagine watching this movie and thinking, "I could do this better," but what in the material compelled him to actually be passionate enough to follow through on such idle thoughts?!
Top

The other question that needs to be asked is, in what world is Palmetto "an old classic noir picture", which is how De Palma described it?
Top

Perhaps he's having a little bit of fun with his choice of words, considering. Also, I would consider 21 years to be old!
Top

It would have qualified for our "Old Films" subforum, even!
Top

In an interview for Associated Press, De Palma reveals that the title of the film is Catch and Kill, and that he hopes to start shooting in August.

Kind of optimistic, what with a certain virus wreaking havoc in Europe and all.
Top

Obsession: While the comparisons to Vertigo are clear in narrative signifiers, this psychological thriller takes a very liberal application of audience surrogate positioning. Robertson is more aloof than Stewart both as an actor and a character, and so his vulnerability and general emotional core is only guessed rather than felt (though apparently De Palma thought this was a flaw, while I see it as a strength if viewed in the scope of the entire complex experience of barring viewers to connect to any character in singularity). Bujold is an object that transforms into the closest we get to subjective alignment about 2/3 through, and Lithgow's friend maneuvers from curiously suspect to caring pal, back and forth, also from a distance (that is, until all of this chaotic assembly of attention unloads its intentions and floods us with a sickening stimulus overload). The leading man's shadow would suggest a Rebecca nod, but in opposition to all of these Hitchcock films, De Palma allows us to be completely separated from the action as our own character, watching, curious, invested in our own psychological thriller rather than that of the characters. The score is phenomenal, with familiar Hermannisms that provoke our own individualized conditioned responses to the suspenses from film history while retaining an originality that peaks in confident mastery soaking the image with a style that warns and triggers. Though it also promises something different and is almost frightening in how it leaves the audience out to dry from involvement, cutting off typical engagement strategies and changing up perspective on us like whack-a-mole, and yet it binds us to the screen with our own cumulative histories and achilles heel for envelopment-by-confident-design.

The approach to narrative is so expertly refined in its fluidity that we hardly notice the mess this could be in the wrong hands. I think this is De Palma's most effective thriller because it destroys conventions upon conventions while sticking to a skeletal formula that has captivated us a thousand times before and will not fail us now. I legitimately did not know how any character was going to present at any given moment (or when the score was going to jump in at pulsing levels!), expecting the unexpected and thus convinced that 'normal' human behavior in this film was foreign, to the point of achieving a kind of cinematic psychotic episode. This was all the more impressive since I knew it would simultaneously follow some internal logic that would drop a twist and route itself into comprehension within the rules of the game but still felt abandoned by the assurances taken for granted that provide that voyeuristic safety net. This dance of wild vulnerability within a shell of containment had my heart rate pounding throughout with a smile on my face, so whatever just happened worked. Having seen most of De Palma's films long ago without bothering to go back to fill in the missing pieces, I can't believe I slept on this one as long as I did, as it's one of his very best. Who knew such an exhausting experience could be so sublime.
Top

Circa 1993: Angie Dickinson thinks she’s going to be doing an interview with De Palma, instead discovers Pat Sajak, who is trying to put on a This Is Your Life revival. To say Dickinson steadfastly refuses to participate would be an understatement!
Top

Made my day.
Top

Has anyone else here read Are Snakes Necessary?? It's definitely a *slightly* embellished screenplay, and even Michael Crichton's
literary works have more meat on them than this. It's pretty gloriously stupid, and differs significantly from De Palma's films in that
the narrative switches between about 6 different characters. It sort of plays out like a "greatest hits" compilation, with a David Mamet
quote uttered by one character, a film-within-a-film about remaking Vertigo ("Ours is in France, like the book"), political commentary
on contemporary America, photographers, blackmail, etc. There are some incredibly funny moments, but like Woody Allen's
To Rome with Love, the young characters speak in a distractingly unnatural and clumsy way (are there really people out there
who verbally say "WTF"?). Also, De Palma is much better at visually presenting sex scenes than translating them to prose. It's definitely
the craziest beach read you might ever pick up.

By the way, the excerpt above is NOT in the novel.
Top

That was just a split diopter joke, not claimed as a real excerpt
Top

Dude got a byline in Interview Magazine.
Top

Came across this about Obsession:

SpoilerShow
The screenplay also called for a Patti Page song, ‘Changing Partners,’ to be played during Michael’s opening dance with his wife and daughter, but the rights would have cost about $15,000. [The movie had a very tight budget - they initially raised an inadequate $4 million, a quarter of which came from a producer's own wealth - which resulted in numerous changes to the script during the development phase.] Said [Paul] Schrader, “The money thing that hurt me most in the movie was that I lost (the song), because that to me was just everything that the movie was about… ‘I’ll keep changing partners till you’re in my arms again.'” In its place, Herrmann composed a waltz theme that recurs at the end, when De Palma’s camera swirls around the reunited father and daughter.
Here's the recording in question and as much as I like Herrmann's score (a masterpiece in itself), this feels pretty perfect, with a sense of humor that puts it on par with Kubrick's musical choices.
Top
Post Reply
97 posts