Discuss DVDs and Blu-rays released from Arrow and the films on them.
Forum rules
Post Reply
26 posts
Message
Author 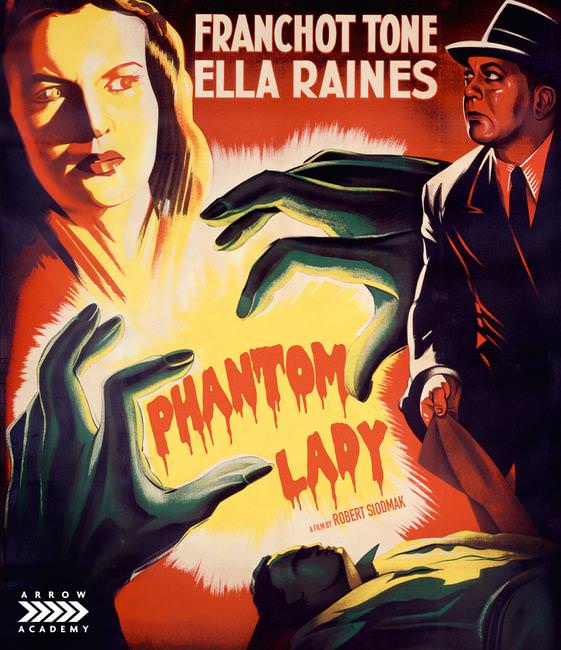 From one of the masters of the film noir, Robert Siodmak (The Killers, The Dark Mirror), comes the consummate crime classic, Phantom Lady. After a fight with his wife, Scott Henderson (Alan Curtis, High Sierra) heads to a bar to drown his sorrows. There he strikes up a conversation with a mysterious, despondent lady who agrees to accompany him to a show uptown but withholds her name. Arriving home, Scott is met by grimly countenanced cops - his wife has been strangled with one of his neckties and he is the prime suspect. He has a solid alibi but his theater companion is nowhere to be found and no one remembers seeing them together. When Scott is charged with murdering his wife, it falls to his devoted secretary 'Kansas' (Ella Raines, Brute Force) to find the phantom lady and save Scott from the electric chair... Adapted from a hit novel by acclaimed crime writer Cornell Woolrich, Phantom Lady boasts stylish cinematography, cruel characters and memorable performances from Ella Raines and Franchot Tone (Mutiny on the Bounty). The film is presented here for the first time in stunning High Definition.

Excellent, I can finally ditch the Dark Crimes DVD set. For those who haven't seen this, you're in for a treat, as this film contains not even just one but TWO of the craziest, most audacious sequences in the history of film
Top

I'm so happy they are putting this out. Love the film. The drum scene with Elisha Cook Jr. Is among my favorite Noir scenes ever.
Top

How does Arrow commission commentaries for the recent lousy Sony noirs but not this?
Top

domino harvey wrote: ↑
Fri Dec 14, 2018 11:40 am
How does Arrow commission commentaries for the recent lousy Sony noirs but not this?

Even simply a select scene commentary would have been ideal for this one. Oh well.
Top

Especially given Kat Ellenger and Samm Deighan's OMGs in the Facebook comments, it looks like they'd have at least two willing commentators.

Commentary or no, this is an instant pre-order for me.
Top

I'm usually pretty lax on covers (even Criterion's, which have quite the quality range), but I think Arrow's default cover for this is quite atrocious. For me, the color scheme doesn't fit at all the cool, modernist textures and moods of the film, and that drawing of Ella Raines is embarrassingly crude for one of the unsung beauties of the Golden Age. I'm glad that there's reversible artwork.

However, the film is great, and one of the great wartime woman's pictures-films noir. In addition to the two "crazy, audacious sequences" Domino refers to (which I think we're in agreement on), the last section of the film feels almost proto-Antonioni in its use of space.
Top

They could have used the wonderful image on the cover of Silver and Ursini's first Film Noir Reader, of
Kansas conferring with her boss while he's seemingly ensnared by railings (courtesy Woody Bredell's cinematography).
I'm so pleased to read this news, a definite pre-order for me as well. What with all the recent noir blu-ray releases (including long-sought treasures like the Alton trilogy from ClassicFlix, but also the regular output from Warner Archives, KinoLorber, and the stacked releases by Criterion, Indicator, and Arrow ... plus the KochMedia German releases), it's really the best time to be alive for noir fans. Okay, for cinema fans in general. And fans of kevyip, especially.

This is one of my favorites and first Siodmak, since I saw it as a teen on WGN late one night; I was both thrilled and baffled by the seeming perversity of Elisha Cook's drummer and Franchot Tone's sculptor. My favorite extended sequence is when Kansas stalks the bartender to get information, watching him motionlessly from the end of the bar, hounding him through the rainy streets in her translucent raincoat.
Top

"Dark and Deadly" is another great rescue of an episode of the Cinefile TV series made to accompany a Channel 4 series of films in 1995 (the episode from earlier in 1995 for the "Reel Women" season appears on the Gas, Food, Lodging disc). This season that this episode introduced showed a classic film noir on Friday evenings and a modern 'neo-noir' on Sunday nights, hence the mention of Dennis Hopper's contribution to the programme as the neo-noir section featured his film The Hot Spot.

I wonder if the episode produced to accompany the "Novel Image" season might turn up at some point now. Or the "School Daze" one?
Top

Blu-ray.com; reviewer is not a fan.
Top

Because he's previously noted that the actual ratio on the disc is 1.33:1.
Top

Ah, got it, thanks
Top

What he doesn't mention (and I'm not surprised) is whether the Arrow BD is mastered from the same Universal source as the Carlotta DVD. He has resumably never seen the former. The French disc has superb texture, blacks, and grain and the major if not quite the only technical problem with it was "instability" or occasional shrinkage/frame jitter. I don't still have the Carlotta cover material to check but their source might have been a nitrate fine grain, it looks that good.

I really loathe Kaufmann's reviews, especially at the "analytical" level where he disses the narrative structure as weak in what is to me and many others one of the half dozen greatest Noirs. Siodmak's tactic is to present a woman obsessed to the point of ultra high risk taking inthe defence of a relatively blank male object. It's post-oneiric, and one of the most beautiful Noirs in tone, like Dave's sublime Dark Passage which has a simialr premise, with various twists and turns. Both films are not obviously but more deeply genuinely dream-like works.
Top

I didn’t bother to keep reading after he criticized the film for it’s “passive” protagonist, completely missing the point
Top

I'm glad I wasn't the only one who found the review completely off-the-mark. It's as if he stopped watching, frankly, based on how much relevance he places on Scott Henderson, when the film clearly is working with what I consider perhaps the greatest bait-and-switch narrative this side of Imitation of Life. How on earth someone manages to review this film and relegate Ella Raines's superb female "detective" not only to secondary importance (behind the prize-to-be-won Scott Henderson) but to tertiary importance after Franchot Tote's character as well, is shocking. He's also clearly never heard of dramatic irony.

I'm disappointed by the lackluster special features. What I'd like to know most though is––what's the reverse cover art?
Top

Pretty sure Ella Raines does not have fetal alcohol syndrome
Top

God––for my money, both are worse than anything Criterion's done lately.
Top

Nothing there motivating me to upgrade from the Carlotta.
Top

And - I repeat - there's no guarantee the Arrow is mastered from the same element. I took a screen to compare the second last screen from the Arrow review. THere's no tramline scratch in the Carlotta. They're from differnec sources.
Top

I was worried this film would be another serviceable noir entry after an unengaging start, but once Ella Raines shows up it skyrockets to 11, starting with one of the most incredibly conceived scenes with the bartender… eerie and mostly wordless, this was utterly captivating and the film never really let up from here. Raines plays with her image throughout her mission, including at the bar, and becomes unrecognizable in the drum scene. I was struck by how she plays the part as a compassionate innocent with a determination that feels real and allows her to move through various foreign spaces like a chameleon reflecting her image on each system without coming off as silly. As a strange kind of inversion of the film noir structure she becomes blended with these dark spaces and figures and forsakes any sense of identity for existential purpose, taking this common theme and soaking it up like a sponge in an original way. Even the last act which suffers a bit after the reveal worked for me, and played more like a horror film when the villain’s psychology and his stone-like presence as we notice a key object missing built more dread than your typical ‘noir.’
Top

After the 32 minute mark thanks to HD I could see a fishing line stretched from Kansas to the bartender as they cross a street and I can't think of any reason why that line was there. I can only surmise perhaps it was to be used in a manner similar to La Dolce Vita when Ekberg's hat "flies off" from a gust of wind but in the Kansas/Bartender street crossing the line doesn't seem to be used for any purpose.
Top

Hadn’t seen this one before, which is somewhat surprising as Siodmak’s Criss Cross and The Killers are among my favorite films noir. After a bit of a slow start, this was quite enjoyable, with Elisha Cook Jr’s “hot jazz basement” scene a particular standout.

Unexpectedly, this turned out to be the second noir film I watched this week featuring a female protagonist as amateur detective — the other being Woman on the Run, which I loved as a “film noir of remarriage” (a sub-genre I hadn’t imagined existed.)

While I loved this film, I found this to be an underwhelming release overall. It was a great opportunity to shine a light on aspects particular to this film (the uncommon protagonist, Robert Siodmak’s career, Joan Harrison’s contribution and career, Cornell Woolrich, etc.), on which it largely didn’t deliver. The booklet essay, which treated in part a number of these subjects, was very good, but is only a temporary artifact of the release (first print run only). Commentary or video essays would have been welcome. The Dark and Deadly doc would have been a very good secondary supplement, but it was largely irrelevant to the film itself.

I guess I can’t expect all of Arrow’s releases to knock it out of the park, but this one was a bit of a disappointment for such a fun film.
Top
Post Reply
26 posts

Return to “Arrow DVDs and Blu-rays”