Tempting though a Music Box / Jagged Edge / Basic Instinct / Betrayed collection is (or isn't), I think it looks like Invaders From Mars.
Top

MoC wrote:On Weds 15th June at Midday (12.0 pm UK time) we'll be announcing an addition to our September slate.........A film that can lay claim to being one of the most important American films ever made will be joining the Masters of Cinema Series

It's got to be Smokey and the Bandit 3.
Top

Sounds like they finally cleared up the rights for The General to me.
Top

The General would be awesome. I got rid of my Kino version knowing that the 4K will come from Cohen or MoC.
Top

I'd obviously be very happy if it is The General, but as with all of these teases I'm just going to say my default answers of Days of Heaven and/or Paths of Glory...

There's also a chance it could be Stagecoach.
Top

Actually, the real smasher would be Stroheim's "Greed". Let's wait and see.
Top

FrauBlucher wrote:one of the most important American films ever made

MoC and Eureka tweeted this.... 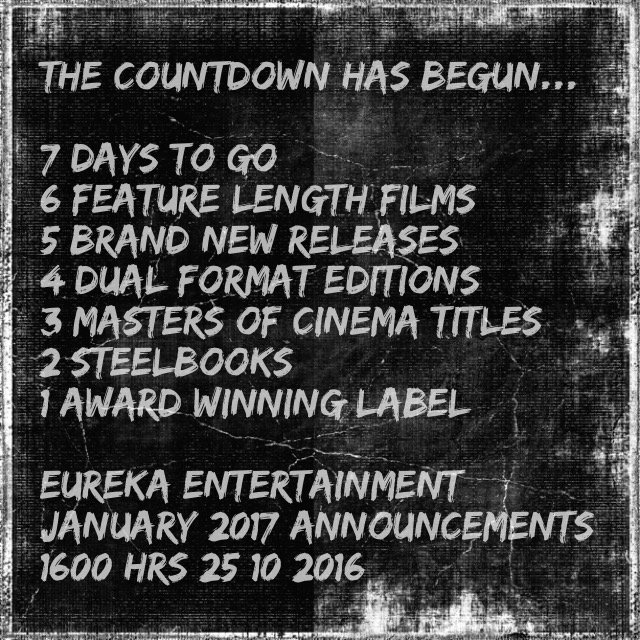 Mouth-watering... I'm glad MoC have returned to having large scale announcements. If I'm reading it right, there are going to be five releases announced, one of which will contain two films?
Top

Or maybe one is just an upgrade ?
Top

Yeah one could be an upgrade of a DVD title, or a reissue of a title that recently went OOP, or even Man With a Movie Camera (since the initial version is a Limited Edition, I assume the second BD and part of the booklet are the 'limited' bits). But you could be right, and one of them could be a double-bill or box set...we'll just have to wait and see!

As for titles that may show up, Kurosawa's Creepy is already scheduled in for January and hasn't been formally announced, so that'll probably be one of the three MoC titles. The other two are likely to be Dupont's Varieté and/or Buñuel's Death in the Garden, but you never know we might have a surprise in there. We also know Lang's Destiny is on its way, but I have a feeling they're taking their time with that (we may not see it 'til Q2 next year), and they hinted at Hou's Daughter of the Nile at the Berlinale earlier in the year (though were quite vague, so could've just meant Taiwanese film in general, which could mean Hu's Legend of the Mountain). Fukada's Harmonium isn't out 'til mid-2017 apparently, but has been confirmed for MoC as well.

As for the non-MoC titles, I reckon one of them might be Rintaro's Metropolis (possibly one of the steelbook titles), and there could be other Sony acquisitions in there too - maybe something potentially popular like Starman, Donnie Brasco, Jabberwocky, Gattaca, Krull, Fright Night, or The Blob? Wouldn't be surprised if titles like those started showing up considering some of the studio choices Eureka have made of late, but then again new label Indicator may be interested in them too. I wouldn't say no to most of those to be honest...

Nice that they're doing steelbooks again. I wonder if we'll ever see one for MoC again? The last one was that Ultimate Collector's Edition of Lang's Metropolis, and it's excellent. Before that was Lumet's Serpico, but not sure it sold that well. Must say I don't buy steelbooks these days, but would do if they were from Eureka.
Top

Join us tomorrow at 3pm UK time , 5 July and we'll be revealing details of our FIVE Sept. 2018 releases, incl. 2 new entries to The MoC Series, one of which is a 1st entry for a certain director.