Discuss DVDs and Blu-rays released by Eureka/Masters of Cinema and the films on them. If it's got a spine number, it's in here.
Forum rules
Please do not clutter up the threads for MoC titles with information on pre-orders. You can announce the availability of pre-orders in the MoC: Cheapest Prices / Best Places to Buy / Pre-Orders thread. Any posts on pre-orders in any other thread will be deleted.
Post Reply
82 posts
Message
Author 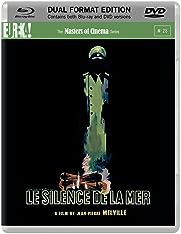 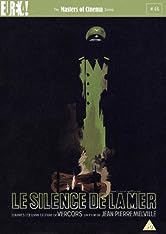 Le Silence de la mer – Jean-Pierre Melville’s debut film – is an adaptation of the novella of the same title by celebrated French Resistance author Vercors (the pen name of Jean Bruller). Clandestinely written in 1942 during the Nazi occupation of France and furtively distributed, it captured the spirit of the moment, and quickly became a staple of the Resistance.

Melville’s cinematic adaptation – partly shot in Vercors’ own house – tells the story of a German officer, Werner von Ebrennac (Howard Vernon), who is billeted to the house of an elderly man (Jean-Marie Robain) and his niece (Nicole Stéphane) in occupied France.

One of the most important French films to deal with World War II, and a landmark in Melville’s distinguished œuvre, Le Silence de la mer is a lyrical, timeless depiction of the experiences and struggles of occupation and resistance. The Masters of Cinema Series is proud to present Melville’s debut film for the first time on Blu-ray in the UK.

• New high-definition original aspect ratio transfer, licensed from Gaumont
• New and improved optional English subtitles on the feature, documentary, and trailer
• Video discussion by Ginette Vincendeau, professor of French cinema at King’s College London [23:00]
• Melville Out of the Shadows – a new French-made documentary about Melville’s film [41:00] (Blu-ray only)
• Original theatrical trailer (Blu-ray only)
• 56-PAGE BOOKLET including an article by Ginette Vincendeau, author of Jean-Pierre Melville: An American in Paris, and a Melville interview by Rui Nogueira, author of Melville on Melville
Top

Probably the most exciting release news of the year so far (and Criterion hasn't exactly been slacking). Virtual bouquets to peerpee and co!

Don't know what extras are already lined up, but a decent transfer of 24 Hours in the Life of a Clown appeared on the Korean Their First Films disc.
Top

This is simply wonderful news. After L'armee des Ombres this must surely be the last remaining Melville masterpiece to get a DVD release, and I hope it's completely revelatory to all.

Among a myriad of great pleasures the movie affords, one is the musical form of the monologues about art and culture and the hopes for a glorious idealized pan European future which Howard Vernon recites each evening to the silent, unresponsive uncle and niece who barely tolerate his presence. And at the conclusion of each rhapsodic monologue - each becoming more moving than the last - he takes his leave of the room, the couple and their hearth with the phrase "je vous souhaites une bonne nuit", musically like a coda for each phrase of a magnificent ground bass forming the core of the film. This is just a fantastically beautiful movie. All us Melvillians are going to be very VERY happy.
Last edited by Anonymous on Sat Mar 17, 2007 3:13 am, edited 1 time in total.
Top

I often waver over what I consider to be Melville's greatest film, but Le Silence de la Mer is one of them. What's most remarkable about the film is that it was Melville's first film, made with mostly his own resources, without the help of a studio, and against absolutely enormous odds (he promised to burn all prints of the film if it wasn't approved by a panel of Resistance members and the author of the novel itself). But as Melville himself said, he understood film theory perfectly, he just didn't know how to make a film. He learned how to make a film by making this masterpiece. Unbelievable.

I've only seen Le Silence de la Mer in a relatively mediocre VHS version. I haven't plunged for an MOC disc yet because of cost, but I'd do it for this film.
Top

After l'Armee des Ombres this must surely be the last remaining Melville masterpiece to get a DVD release, and I hope it's completely revelatory to all..

I don't believe Deux hommes dans Manhattan is on DVD with English subs, but please, someone tell me I'm wrong so I can buy it this second
Top

Righteous news... just about to throw up an unsubbed version up (after a huge backlog of stuff), and now this announcement. Way to keep your left up, Nick, versus this very strong first quarter from CC.
Top

I do hope this comes with a Ginette Vincendeau commentary. Her commentary track for Armée des ombres is one of the best I've heard on any DVD (and of course references Silence and Léon Morin many times).
Top

Nick, if you're looking for fresh voices for either a commentary, an essay, or whatever, might I suggest Tim Palmer? He's an old school chum who wrote his dissertation on Melville. I mention him not out of nepotism (I actually haven't seen him in years), but because I think he would do a good job.
Top

Does anyone know when the estimated release date for this title might be?
Top

We're aiming very hard for June. Ginette Vincendeau has been filmed talking about the film exclusively for our release.
Top

We're aiming very hard for June. Ginette Vincendeau has been filmed talking about the film exclusively for our release.

Well, now you've said it you can't blame us for tearing you to pieces if you don't release by the end of June...

peerpee wrote:We're aiming very hard for June. Ginette Vincendeau has been filmed talking about the film exclusively for our release.

Cool. Thanks for letting us know. We truly appreciate the info.
Top

June 25 release, according to Play.com.
Top

Available for pre-order on Amazon
Top

Also from HMV for Â£11.99 (not sure about international orders mind).

Really looking forward to this, most of my limited expierence with regard to Jean-Pierre Melville films has been his later works, so it will be interesting to see the response now that it is soon to be available to a wider audience...kudos as always MOC.
Top

Now 11.98 at Amazon. Its a good thing I have two different orders open.

Should I feel like a skunk for cancelling the higher pre-order?
Top

Does anybody knows the region enconding? NTSC or PAL?
Top

Like our previous title from Gaumont, TONI - it will be PAL R2.

The LE SILENCE DE LA MER booklet will be 56-pages.

Here are some grabs from the finished MoC disc. It's progressive, and looks like a million dollars (mostly thanks to Henri Decae):

YES! I never thought that it would look as great as this. A zillion thanks to MoC. Time to bin that kinoscope-esque DVD-R bootleg.
Top

This looks even more beautiful than the OOP Gaumont! Which is saying something!
Top
Post Reply
82 posts