Any Schitt's Creek viewers here? Can't help but feel that LQ and I are late to the party, as after we started watching it we found out that it seems to be massively popular and one of the hippest shows on television, and it is certainly one of the funniest. Catherine O'Hara is the standout, as her character speaks in sort of an invented high-class accent that morphs and changes and never fails to be absolutely, bust-up hilarious at least once per episode depending on what outdated multi-syllabic word the writers put in her character's mouth. It's tonally a little bit different than it was when it started and was a lot more slapstick - the show has settled into being something much more soulful and sweet and less gag-intensive, which is really smart from a longevity perspective since any half hour comedy like this tends to get less funny as it goes on anyway, only unfortunately, most of them are still trying to be as funny as they used to be. We're into the 5th season now and it's just gotten to the point where it's nice to spend time with these people, and to see the ways they mature and grow. What a great series!
Top

Yeah, my wife and I watch it. The first couple episodes I thought it was going to be insufferable but it has some of that old Arrested Development magic in how it builds and very gradually reveals more and more layers to its characters while still keeping everything brisk and funny. So many fun side characters, too.

We've still got a season and a half or so to finish but right now I'm a big fan of the veterinarian and Jocelyn. Of the main characters I gotta say, I didn't think Eugene Levy would make the best straight man but he really does.
Top

John Hemphill is a great standout to me as Bob, particularly in the 2nd and 3rd seasons (I think I have that right) when Johnny has an office space set up in his garage. He is just brilliantly strange and cutting, playing his character's unusual passive-aggression to a T.

Could probably write a little love letter to the strengths of everyone in the cast, though, big and small. They've all managed to contribute something unique to the formula of the show, even if the 'volume' of their performances or their level of involvement in the show's plotlines has ebbed and flowed over the years. There are times when one character is the emotional backbone of the series and another is sort of occupying the B and C plots in some tangential way, and then they'll move to the foreground in another episode while another character takes the back seat. Everyone is so generous with their egos and it really shows in the final product.
Top

mfunk9786 wrote: ↑
Tue Feb 26, 2019 6:14 pm
John Hemphill is a great standout to me as Bob, particularly in the 2nd and 3rd seasons (I think I have that right) when Johnny has an office space set up in his garage. He is just brilliantly strange and cutting, playing his character's unusual passive-aggression to a T.

Agree on Bob. A great character. Low-key manipulation with a smile.
Top

What I find pretty amazing is that Levy and O'Hara have continued their association as a comedic duo for over forty years, longer than any other comedy duo (or team) I can think of. Starting with SCTV in the late 70s, and continuing with the Christopher Guest "mockumentaries", the two actors have developed such an easy rapport that the humor seems effortless. On top of that, who would have thought that Levy teaming up with his own son (and daughter) would work so well? Dan Levy seems to be the real creative juggernaut on the show, and I believe he and his father have set a new precedent for effective comedy pairings of real-life family members.
Top 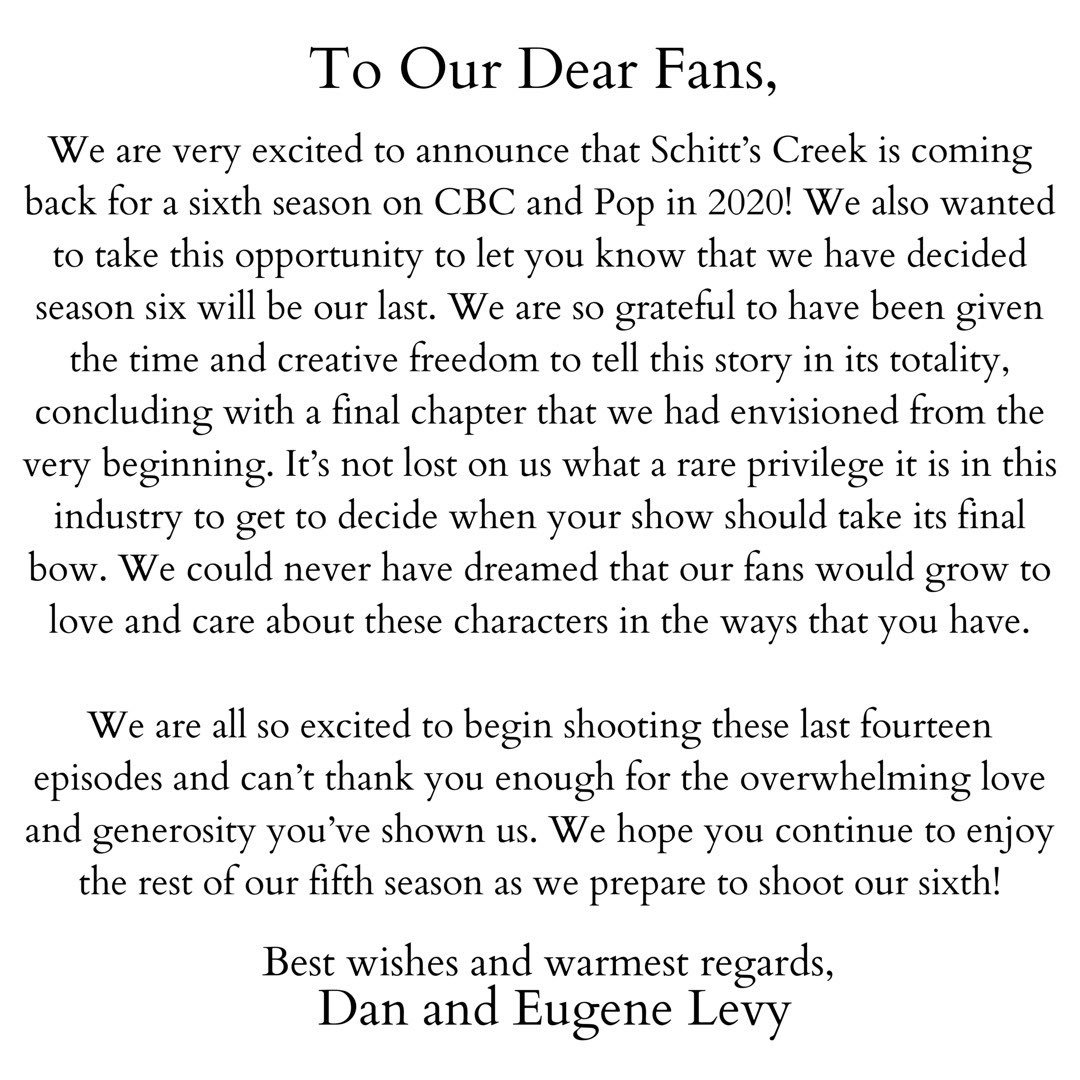 Felt like this could have gone on and on, but ending it here will surely cement its status as one of the best sitcoms of the last several years. Now caught up with Season 5 and while the show feels a bit more... polite(?) these days the quality has hardly dipped at all.

SCHITT'S CREEK has returned for its final season, and well, my disappointment is growing. The show was so good for so long, and I'm just not finding the laughs, aside from Catherine O'Hara's way with the English language. There are glimmers, of course, but I'm too often left scratching my head at some choices -- the Stevie I'd been watching for all those episodes would have seen through LarryAir on the basis of that brochure alone, frankly, and Chris Elliott's Roland has just become unendurable. I'll keep watching largely because of those glimmers, like Dustin Milligan's gloriously faux-casual "oh hi" when Alexis shows up for his arranged online date.
Top

The show took a relatively strange turn into turning its lower middle class setting into a neoliberal, gentrified paradise of life lessons, an inexplicable general store selling expensive lotion and wine to people who once borrowed each others' trucks, and fewer laughs (as you mentioned) than before in exchange for a more soapy plot-driven vibe, always with an eye on character growth and acceptance. Which isn't a problem on its face, mind you - it just is what it is. It's far less of a joke-forward show than it started out to be, and I even have seen some people online stating that the first couple of seasons didn't work for them, which is baffling to me, but it says a lot about what they're looking to get out of it. At any rate, the baton was entirely handed from Eugene to Dan in what feels like a natural way midway through, and the Mayor Pete-ification of the show that followed is surely just a byproduct of a divergence in the two men's sensibilities.
Top

I revisited the first few episodes of the first season, and I'd forgotten how really mean the Roses really are upon their arrival in the Creek. The point of the show always seemed that we would gradually watch them loosen up and become human, while still retaining their essential Roseness, and by and large it has all gone splendidly, that lovely little moment when they all admit that they love each other could have been so ghastly and it actually wasn't, and the same-sex relationship has been handled with a degree of warmth and wit that never devolves into bogus tragedy or phony solemnity. I can't help praying for Roland to push the "prosecutor" one step too far and wind up dead, giving the sublime Jocelyn more to do.
Top

Yeah, it's less the portrayal of identity and more the portrayal of the class divide that has fallen off for me. This is a small, mostly impoverished town with lovely people in it, which is something the show was keen on representing without judgment outside of the misguided sneering of its main characters. By this point in the series, it seems more reminiscent of a neighborhood in Brooklyn, which reduces the impact of what the show was doing early on.
Top

We have enjoyed this show immensely, binged everything available on NA netflix in a matter days. Unfortunately season 5 was hard to sit through, less laughs and every episode just feel flat by the end. Not looking forward to the final season, will watch it to finish the series but have low expectations.
Top

The fiance and I tried getting into this show. I think I made it 2 1/2 seasons and she made it full 3. I really kept waiting for it get funny. We heard to keep watching it after the first season but it wasn't any better. They never pushed the bits far enough, always pulling their punches or letting scenes deflate. The main cast is fine but the supporting characters have nothing to do and somehow come back every season? It's not for me.
Top

Speaking as not only a Canadian, but a Canadian boy who, during recess with his friends in the early 80's, worshiped practically every second of SCTV, its entire cast and most of their subsequent projects throughout the years, it broke my heart to come to the same conclusion after giving the first season a shot.
Top

I'll admit I didn't enjoy the show until around season 4, which is a long time to spend on a show that for me was pretty laugh-free. Still, with the pandemic shutdown and the shortness of the seasons, it was still a breezy watch. I just finished the series and think it's a pleasant watch and little more. I'd agree the focus of the series becomes a lot more bourgeois as it progresses, with the financial hardships of the Roses inexplicably cast aside by the series' midway point and them finding success in harebrained business ideas (a rarely visited motel and a high-end boutique shop in a sparsely populated rural town). But I think the show works due to the strength of the personalities and cast, with the locale serving as a nice backdrop but defining the show less and less as it went on. I doubt I'll ever revisit this but it was a nice COVID distraction!
Top

See, I found the first season or two to be pretty much wall-to-wall good jokes and gags, and laughed a lot. The comedy actually became more muted and safe over time rather than the other way around, in my view. But to each their own, just surprised to hear about that trajectory!
Top
Post Reply
15 posts • Page 1 of 1