Ah, nice. I'm eagerly anticipating the return of this series, and especially curious to see how/if Fuller revises the character (specifically his occupation) to make him fit into the show's contemporary setting.
Top

The show will return in the summer. Not too surprised given nothing promotional has surfaced recently.
Top I gotta say that I haven't been pumped up for this season like I have S2. I could just not be in the mood for it, but who knows.
Top

flyonthewall2983 wrote:I gotta say that I haven't been pumped up for this season like I have S2. I could just not be in the mood for it, but who knows.

Might it have something to do with having to wait an extra three months for it? Season 2 premiered in late February, as I recall, and the extra months of anticipation have been wearing me down a bit, too.

That said, having just watched the premiere, I could not be more thrilled that it's back. Exquisite.
Top

The extra time probably had something to do with it.

Yeah, that was quite impressive. The visual choices and how this ties in with how it left off was a nice continuation.
Top

flyonthewall2983 wrote:The extra time probably had something to do with it.

Yeah, that was quite impressive. The visual choices and how this ties in with how it left off was a nice continuation.

Indeed. I like the idea that because it's a Hannibal-centric episode, the aestheticism is even more pronounced than before...which is saying something. Hypnotic, sumptuous stuff.
Top 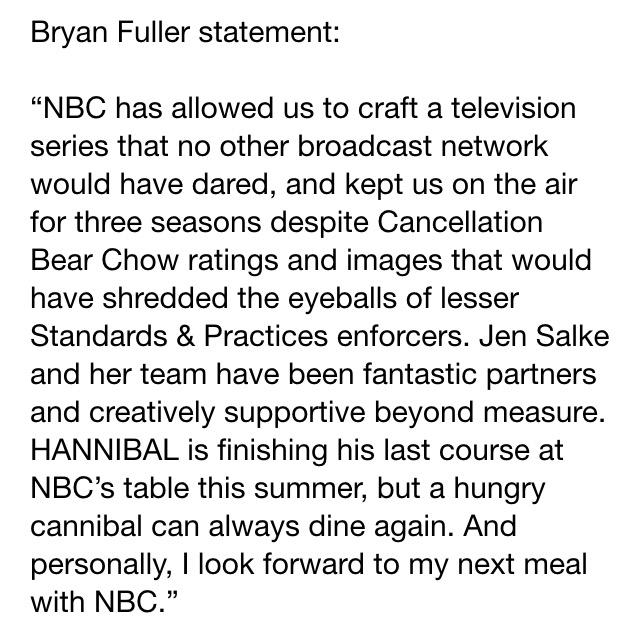 Cheers to NBC for giving it a shot for three years. It's truly an incredible show and has become the series I've looked forward to most of all, so it's incredibly disappointing to see it come to a premature end. Here's hoping someone else picks it up.
Top

Oh, I'm betting Amazon will get right on it. They have the streaming rights already, and I would imagine there is still major interest from other networks if that's what eventually happens.

But despite NBC's record of screwing basically everything up, I'm still astonished that they kept it on for even the one season. Objectively speaking it has to have been the most gory show on any of the big networks, even with the glut of otherwise formulaic crime shows with grisly images since CSI.
Top

So NBC will air the remaining Season 3 episodes this summer, right? Every article I've read so far doesn't say anything about NBC immediately pulling all the episodes.
Top

That's what I've read, that the rest of it will still air.
Top

I'm hoping it gets picked up for a fourth season because I've loved the first two episodes of this season and although the third episode was testing my patience with its very slow pacing, I found this season to be quite bold so far. Hopefully Amazon or Netflix pick it up. I'm hoping it won't be FX because they have a habit of putting out Blu-Rays for a season or two and then dumping the remainder on MoD discs like they did with Louie (cunts).
Top

Thursday's episode had one of the most filthy lines probably ever spoken on scripted network TV.
Top

flyonthewall2983 wrote:Thursday's episode had one of the most filthy lines probably ever spoken on scripted network TV.

Yeah, I did a little double-take during that exchange between Mason Verger and Dr. Bloom.
Top

Ep 5 was a decent episode (better than Ep 3 for sure) but the previous fourth with the flashback to the US was a total stunner. The cross-cutting between the wedding and Bella in the coffin was very poignant.

PS.: Hugh Darcy and Mids Mikkalsen's contracts expired this past week according to the Playlist, so will have to be renewed if Amazon or Netflix pick up the show for a fourth season.
Top

A look at the Red Dragon portion of the season.
Top

Some really interesting choices in the last episode. Namely the more kind of passive role the wife played in Will's decision to pursue this new case.
Top

Really? I thought she had a more active role and was a bigger influence this time around. I might be remembering wrong but my recollection is that in the Thomas Harris novel she was dead set against the idea of Will going back into the field. She's a lot chiller now, which means Will knows he can count on her to set him straigh if need be, plus this way she doesn't fit the typical nagging wife cliché. Like I said, though, I might be remembering wrong.
Top

Amazon execs on why the show wasn't picked up. Didn't realize until I read that article that Amazon actually has never picked up any shows that were cancelled, so it makes a little more sense now.

Having only seen Manhunter and bits and pieces of Brett Ratner's Red Dragon and not read the books, I'm liking how the show is dissecting the key moments and applying it's visual flair to it. It's also heading in a direction I'm finding pretty uncomfortable, even for this show's standards.

I have a feeling if this does wind up being the end, it will go out on an appropriate note.
Top

Rutina Wesley surprised the hell out of me with her portrayal of Reba, following ably in the footsteps of the talented women who played that character before. It's done well to help block out some of her less-than-shining moments on her previous network gig.
Top

Hell of an end. And quite perfect, too.
Top
Post Reply
191 posts