Yvette Nicole Brown asked to be released from her contract
Top

To provide full-time care to her ailing father...and to be on another show?
Top

Its decline was just a red herring.
Top

Honestly, with the phantom season bringing the Jeff-Dad issues to an anticlimactic thud, I'm surprised it took them this long to mine this storyline.
Top

Gillian Jacobs directed the Queen of Code, a documentary on Grace Hopper, and you can watch it here
Top

Community Season Six trailer... actually has a lot of laughs?! Could it be?
Top

So no opinions on this season in exile yet?

Those who found S5 to be woeful probably won't change their minds, but as someone who found the season charming enough if totally complacent (especially given all the backstage turmoil), I can say it's not the failure it could have been. This season hasn't found them changing that – there's been no real standout classic episode yet – but I do feel it's began to own up to it. Instead of fighting against the budget cuts, or the cast changeover or the credibility-stretching 6-year community college premise, I feel the show's at least going with the tide. Gone are the elaborate concept episodes, sure, but in it's place is a much more casual hang-out vibe built off the cast's natural charm more than anything else. If the show seems less concerned with huge arcs and mini-mythos and attempts at huge stakes, it's also given up the trend towards treacle (note the absence of Jeff-speeches) and shipping fan-service, which may have felt arch in early seasons but became overbearing near the end.

It's not amazing television yet, but I feel it's found a more modest groove which it could ride to a second wind if S7 were to occur. Given the downgrade, it's conceivable there saving the big concept episodes for the end, so we'll see how they play out
Top

How do you watch this show now? Is it on the internet or something? My DVR hasn't picked up any new episodes.
Top

swo17 wrote:How do you watch this show now? Is it on the internet or something? My DVR hasn't picked up any new episodes.

It's on Yahoo Screen this season
Top

And surprisingly free, as I thought until recently that Screen was Yahoo's entry into the Netflix/Hulu game, when it's really more their Youtube.
Top

There's no budget downgrade, in fact they have a slightly larger budget than the last season on NBC
Top

Which I've since learned... Perhaps the cast has gotten a bigger payoff or they're planning for something (they are doing another paintball... which is questionable), because it certainly doesn't feel that way.

Of course, after my laurels above, the show took a multi-episode dive into akward "gas leak" territory. With that said, I thought the last episode was perhaps the strongest of the season, and once again it's strength was just having the cast casually bounce off eachother.
Top

Yahoo! lost 42 million producing it and it's other original programming.
Top

Yahoo previously teased that it may be renewing “Community” for a seventh season, or even take part in a movie deal with the Greendale Community College gang. That may appear less likely with Tuesday’s disclosure, but insiders tell Variety that a “Community” movie is still in play — with or without Yahoo.

Still pressing that joke I see. This has become like the Simpsons where I keep forgetting it's still being produced.
Top

Complete series is coming to Blu-ray in September from Mill Creek! 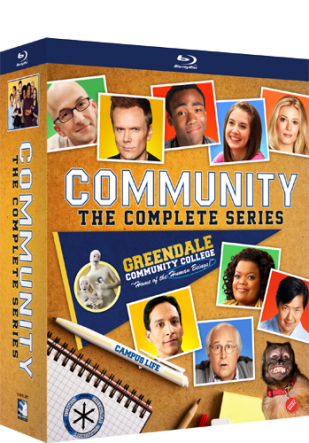 I love that Jim Rash is top billed. Maybe the Dean was the real protagonist all along
Top

Best news I have read all day. The Happy Endings announcement had renewed my longing for Community on Blu. Over the moon for this!
Top

Waiting for this to go down in price but apparently the set has an Easter egg in that the season six commentaries, which were only available via Yahoo and not on the DVDs, are not listed in the extras or menu screens but are available by switching the audio options
Top

Is there any chance that this set is from an actual HD source rather than being an upscale?
Top

Why would it not be HD? Mill Creek has released plenty of Blu-rays for TV series, I've seen zero indication that this is an upscale
Top

I don't believe I've ever purchased any of their TV releases but had read (including here, I'm pretty sure) that they will often release upscales and that they cut corners in general. I also haven't seen any specific indication that this is an upscape, but then I also haven't seen a single review of this set on any of the usual review sites. Mill Creek have been asked this question on social media and I'm not sure there's been any word from them in response one way or the other.
Top

Their Happy Endings and Friday Night Lights series sets are authentic HD releases, the former of which comes from the same licensor. They def cut corners on DVD releases, maybe that's what you're thinking of? No reason to think this would be SD uprezzes
Top
Post Reply
777 posts