Discuss DVDs and Blu-rays released by Second Run and the films on them.
Post Reply
16 posts • Page 1 of 1
Message
Author

I hadn't heard of this film before but Second Run blind buys haven't gone wrong for me yet. Anybody here seen it?
Top

SpoilerShow
According to Arrow's store:

Stella Cadente (in English ‘Falling Star’), Lluís Miñarro’s lavish, lascivious story of the doomed Spanish King Amadeo I in the early 1870s, is unlike any cinematic historical portrait before it. Taking this little-known episode of Spanish history, the film functions as a metaphor for contemporary Spain – and by extension, Europe - and its ongoing state of crisis.

Both historical film and camp melodrama, this richly layered film is suffused with absurdist asides, surreal interludes and sexually explicit reverie. Its bold and beautiful tableaux are filled with casual references to art and literature, colourfully and radiantly filmed by Jimmy Gimferrer (cameraman for fellow Catalan filmmaker Albert Serra, among others). Wonderfully performed, sumptuously designed, sometimes shocking and playfully anarchic, Stella Cadente is one of the most original and transcendent works to emerge in contemporary European cinema.
SPECIAL FEATURES

- Stella Cadente (2013) - presented from a new digital remaster of the film.


Anyone can comment on this? Never heard of it and have yet to experience Serra so I have no knowledge about this
Top

It's definitely worth paying attention to. The central image of the film is of a jewel-encrusted terrapin tumbling through its environment which captures Stella Cadente's stoned glam vibe.

See no reason why there should be a digital remaster from 2013 and it's a pity that such visual film is DVD only, but it sadly never escaped the margins of the festival circuit.
Top 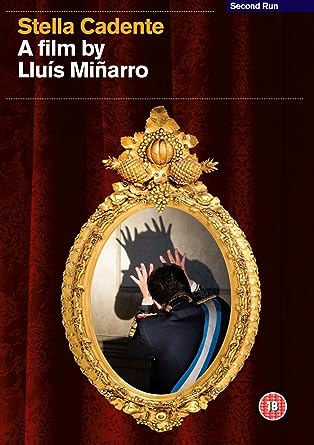 Full details of this release now up at our website
Top

I haven't seen this yet, but all the information above makes it sound as if late Visconti might be an influence. Is that plausible or am I completely on the wrong track?
Top

"A luscious film made to protest an era of austerity, an experimental film that is also pleasurable and easy to digest, an austere, slow film that is also lavish and decadent. If you had to describe it in pitch format you might say it was Shakespeare’s Richard II as a Peter Greenaway film"

"A unique and perplexing experience to savour."

"A fantastic achievement, and one of the most surreal, joyous, blackly comic and beautiful to look at historical biopics you’re ever likely to see... a magnificently unexpected surprise. Highly recommended – this has to be a very late contender for one of the most enjoyable DVD releases of 2016."

I really enjoyed this film. Quirky, elegant, beautiful and funny. It's basically the tale of an ill-fated, ill-fitted King of Spain who travels from Italy to take up his post but when he gets there discovers that nobody really wants him, he's not required to actually do anything, and is also strongly disencouraged from leaving the castle (probably a good thing if he doesn't want to find out what's happening to his fruit). With dicks.

The Serra connection is misleading, as this doesn't much resemble his work formally, though it shares his interest in deflating and democratizing historical / literary figures. A good, solid rescue from Second Run, as this is just the kind of film that can be tossed on festival waves for a few months then sink forever.
Top
Post Reply
16 posts • Page 1 of 1