There's an interesting review here that talks of the differences:


It’s worth noting that there are two versions of Guilty of Romance. The full length version runs at 143 minutes, whilst the edited version is approx 112 minutes long – this review is of the later.

Apparently, in the unedited version there are extra scenes of the murder investigation, which means actress Miki Mizuno is given added screen time and therefore, gives her character, Kazuko, more substance, whereas, in the shorter version, Kazuko appears to be less important to the plot than the characters Izumi and Mitsuko. The synopsis from the film’s press release states that Guilty of Romance is a “dramatic account of three women and their lives”. This may be an accurate description for the unedited version, but the condensed version focuses more on the character of Izumi, with Mitsuko being an imperative character to the narrative too. Sadly, the cuts made from some of the investigation sequences have affected the significance of the character of the female investigator quite considerably.

am i the only one excited about the adventures of mark twain blu-ray?
Top

I somehow missed the news of "Mark Twain" on BD. Lots of extras on it too. here's a review
Top

One Guilty of Romance bluray review implied Eureka might be releasing a special edition with the longer cut. Hope we get some more info on this.
Top

colinr0380 wrote:Very nice to see a Jasper Sharp commentary on there!

The commentary is on the DVD version as well, correct?

Review of the DVD at The Digital Fix. It confirms that all content is identical to the Blu-ray, including the Sharp commentary.
Top

A belated one, but "The Adventures Of Mark Twain" on BD.com
Top

I've just received Eureka's Hanzo The Razor set from Amazon and was surprised to find the three discs and fat booklet housed in a single DVD case in a cardboard box/sleeve rather three individual cases as with the Female Prisoner Scorpion set. I'm sure it was originally a three box set.

I'm not complaining as I'm running out of shelf space as it is so smaller is probably better (although I've probably "lost" some cool artwork from the original box/sleeve and cases), but I was curious as to whether this was a new re-release or if it's been in this form for some time.

(Edited to say that I've just realised the fat booklet seems to be the three individual booklets from the original release compiled into a single volume...)
Top

I also received it like that about a month ago, was a bit sad about the loss of artwork, it saves space but the package is a bit bulky, it's hard to close the case. It was out of print for a while after the fire last year, so I guess this is the re-release from after that incident.
Top

That sounds most likely.

At least it's still a great package even aside from the films themselves. I could imagine a lesser company doing a much more bare-bones re-release but here you still have all the information from the original booklets and a nice slipbox.
Top

Can't see it getting the MoC treatment, but Eureka is handling Antonio Campos' Simon Killer, if this trailer is to be believed.
Top

Eureka have acquired Come As You Are/Hasta La Vista

I wonder what ever happened to a Lone Wolf & Cub Blu-ray upgrade. I was sure it was going to come soon after the Shogun Assassin Blu-ray (which looks great going by the caps). AnimEigo completely ballsed up their Blu-ray release of Lone Wolf & Cub, I'd much rather see a proper release from Eureka. Eureka releases seemed to die off in 2012, perhaps they had their hands full with all the MoC Universal stuff. It's too bad, the additional titles really complimented the MoC series well.
Top

I oversaw a ton of Eureka releases (JUNEBUG, LONE WOLF box, HANZO box, BAD BOY BUBBY, SHOGUN ASSASSIN, WIZARDS, BLACK SHIELD OF FALWORTH, PRINCE VALIANT, PARANOIAC, etc etc) in order to try and lift the technical quality of the Eureka titles to MoC levels, avoiding the schoolboy errors that had been creeping into Eureka titles prior to this. MoC folk worked on all these.

It became a ridiculous stretch to do these and MoC titles at the same time, so I decided it was more important to focus purely on MoC, instead of spreading ourselves too thinly. It takes an awful lot of time and effort to produce titles without error – which is why so many labels mess up.
Top

peerpee wrote:It takes an awful lot of time and effort to produce titles without error – which is why so many labels mess up.

Indeed it does - I've been doing the QC on Arrow's Mario Bava releases (Black Sunday onwards - Bay of Blood was before my time), and they each involved a huge amount of work, with multiple versions of each film, multiple sets of subtitles (Italian translation, English SDH for the European cut, English SDH for the AIP cut), a commentary, a shedload of extras, you name it. Oh, and two formats to contend with, thus doubling the workload, although this did at least mean that all the subtitle tracks got two complete passes before being signed off.

And in every single instance I spotted several mistakes that were thankfully easily fixable but which nonetheless managed to get through the production and authoring process almost to the final signing-off stage - in fact, I think I've done just one QC job where I really couldn't spot anything untoward, but I'd best not name it here in case I was wrong! (It was a vastly simpler disc in terms of content and authoring than any of these, so there was very little to go wrong.)
Top 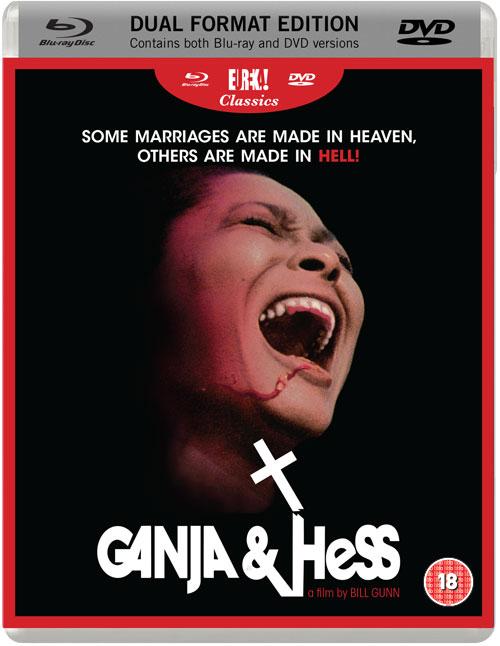 EddieLarkin wrote:Wow! Since he put it out on DVD back in the day, we'll maybe get a new Kalat commentary.

•Beautiful high-definition transfer of the film restored by MoMA and The Film Foundation
•Feature-length commentary with producer Chris Schultz, lead actress Marlene Clark, cinematogropher James Hinton and composer Sam Waymon
•The Blood of the Thing - A interview based documentary on the film with David Kalat
•Select scene commentary with David Kalat
•24-page booklet featuring a new essay by critic and author Kim Newman and a vintage letter written by Gunn to the New York Times, illustrated with archival images

The documentary is from Kalat's old DVD, as is the commentary (called Ganja & Hess Reduced on that disc). I didn't realise that was a commentary though, so this is almost like new to me!
Top

The Man Who Could Cheat Death (1959) is coming. What timing!
Top

Oohh, interesting choice. It was on the Legend Double Bill with The Skull - OK picture quality but easily improvable and lacking in anything vaguely resembling an extra. It's a minor Hammer admittedly, epecially as it's in the middle of the first batch of masterpieces, but there is much of interest and well worth catching. I'm hoping for some interesting extras - somebody needs to get David Pirie to contribute some new writing on Hammer / Fisher.
Top

RossyG wrote:And the Skull is being released by Eureka as well on 26/10/15.

I hoped they might considering the Legend Blu Ray combined both. This is one of Amicus's best films - only Scream and Scream Again of their non-anthologies is superior I think. It's also one of Freddie Francis's very best as director - and probably his finest for Amicus. I'll have to dig out my old thesis to remind myself what I wrote about it - but I can remember Paul Jensen's book The Men Who Made The Monsters has the most interesting analysis of Francis as a director.
Top

I don't even know if it's worth making a thread for, but Eureka's releasing a Blu-ray set of the first season of the Wolf Creek TV series, which is apparently a thing, along with Stigmata and Jinnah
Top