Do you mean One Punch Man?
Top

It's good fun if you go through the whole thing. I don't think it does enough past the first two episodes with its premise, but even with the little it does it does pretty good and remains a constant entertainment level.
Top 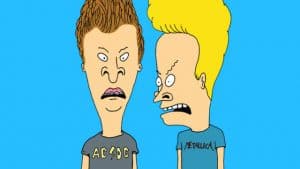 Well, given the second half of Luke Cage, and the second half of season 2 of Daredevil, and now all of Iron Fist, it looks like Marvel's Netflix original series have jumped the shark. Probably only a matter of time. Regardless, Iron Fist is soooooo boring. Even fast-forwarding, I made it through half a season, then gave up.
Top

I think The Punisher will be worth it.
Top

Jessica Jones was pretty solid in its first season so I hope it will be in the second, whenever that happens. I usually avoid superhero stuff like the plague but it separated itself nicely with a focus on rehabilitating survivors. Can't speak to any of the other Marvel shows though, except Daredevil which I had to switch off after two episodes. I'll be very happy to never see another show about a criminal defense attorney who "only defends innocent people." Ugh, fuck that show.
Top

That 13 Reasons Why was a great show!
Top

Really? Everything I'm hearing about it, objectively makes it sound pretty dire to watch.
Top

Tracy Morgan's latest stand-up was just added today. I never found him that funny in any format before his accident but I'll give this a go. Can't be worse than the Chappelle return.
Top

The Chappelle specials were pretty great. Don't have time to write more than that now, but would hate to have that become the forum consensus.
Top

I thought the two specials were - typically for Chappelle - shaggy, idiosyncratic, and ultimately quite funny.

I was actually at the show in Santa Fe he references in the second special during which that assclown threw a banana peel at him, and given that this was very much in the period where he was notorious for walking off stage at the slightest provocation, it was pretty surprising that he continued the show and talked/riffed about it for almost forty minutes before returning to his prepared material and wrapping up the show. The incident certainly derailed the show, but the fact that he processed it in front of a crowd and still eventually brought things back on track was both generous and uber-professional in a way that was really impressive and memorable.
Top

I heard the Norm special was hilarious. I really drag my feet on stand-up specials these days. Since Carlin and Robin Williams died, especially.
Top

The Get Down has been cancelled after one season-- is this the first Netflix original series to not at least get a second season order?
Top

It was kind of two seasons (one order split in half), though it's still very refreshing to see this happen.

I feel like it's an underappreciatedly crazy fact that WB took a big risk and gave Baz Luhrmann $150 million to make a blockbuster 3D version of a work of classic "adult" literary fiction and it made a ton of money and his reward was... a TV show on Netflix.

(One that cost $120 million, mind, but still not very encouraging).
Top

Not surprised, Buhrmann predictably drove up the cost exponentially, even long after principal photography was finished, with his haphazard throw-everything-at-the-wall-and-see-what-sticks "filmmaking." No one should ever give that guy money - you can literally eat it and still wind up with more or less the same result.
Top

And a good case of ink poisoning.
Top

So marginally less painful than watching his version of Gatsby again.
Top

Jeez, thanks for the reminder....Gatsby was absolutely dreadful and a waste of a pretty decent cast. Pity poor Amitabh Bachchan having to be in that crud.
Top

Cinemax's Quarry was* quite good. The digital aesthetic works against it a little, but everything else makes you feel like you're in 1972 America. Logan Marshall-Green is equally convincing as the show's lead, blowing away his previous reputation as a bargain-basement Tom Hardy for Prometheus. Peter Mullan (looking almost like Ridley Scott funnily enough) would probably be my personal MVP, as the mysterious Broker.

*
SpoilerShow
The Knick getting canceled and the recent announcement from the network that they would focus much more on action shows makes me not so optimistic for a 2nd season. Plus considering how it ended, I feel like they told as much story as they could anyway.
Top

It just seems like they're not sticking with shows that aren't very good. Girlboss did poorly with critics and didn't seem to have much of a following. I welcome Netflix finally letting the cream rise to the top and cutting shows off that don't work. However, if this whole cancellation thing backfires and the new MST3K doesn't get picked up, I'll take all that back.

P.S. GLOW is a shabby but often amusing series, but does a bit too much playing around with an really unusual concept. Marc Maron's a standout, essentially playing a much angrier Ted V. Mikels type. It's not going to be getting any notices as the best show on television, but there's a solid foundation for the future there if it gets picked up (and being from some of the creative team behind Orange is the New Black likely gives it a leg up in that department)
Top

I liked the premise for Girlboss but the trailer wasn't funny at all and you have to figure they'd put at least some of their best material in that, so I never bothered. I didn't even realize that was the girl from Tomorrowland / the Last Ride til reading the Variety article
Top

Trailer for American Vandal, a parody of Making A Murderer and its ilk. Somehow this thing is scheduled to run for 8 episodes when it looks like the joke runs its course halfway through the trailer.
Top
Post Reply
135 posts