Discuss Blu-rays released by Indicator and the films on them.

My firm policy with issues like this is not to answer them until I’ve personally inspected the master - and I haven’t done that yet.
Top

That is a beautiful looking set. I just put in my preorder with Indicator directly. I trust them more with their packaging for US shipping than Amazon and Jeff Bezos doesn't need my pounds/dollars.
Top

While nobody from Indicator has taken the trouble to ask me personally about the missing footage from Shanghai Express, several others very kindly did. I made initial enquiries through my own Oz collectors network and got warm with two people who had previously kept very old early vhs tv captures from the early 80s. They no longer have them but even these older 16mm MCA sources may not have been intact. If anyone from Indicator cared to ask me directly I could have suggested two other sources, both closer to home. I would say at this late stage they have’t been able to get the material, but one assumes they will surely include the missing text somewhere in the extras for the title. To add to this I really wish they had looked further afield for a better 35mm source for Morocco. At least two US collections have nitrate fine grains but I am assuming the costs of grading and scanning would have been prohibitive. To say nothing of the contractual arrangement with Universal.

Edit: the media release misspells the title of the cut song from Devil as “if it isn’t a pain”. It should be “if it isn’t pain”, no article. This from the queen of dyslexia.
Top

This looks like a superb set and the artwork is simply gorgeous, the work of Nick Wrigley I presume?

I agree with David, I do hope that Indicator have made efforts to find the missing footage. I suspect that it's the first place that they would have looked, but the BFI National Archive has a 35mm positive that they acquired in 1963 and also a later 16mm source that notes "jump cut reel 5 indicating this is the 1935 re-cut version". Was the footage originally cut for the 1935 reissue? Or was there other footage that was cut between 1932 and 1935?

Other than that, the only thing I would have really loved to have seen included is Maximilian Schell's Marlene as the Park Circus DVD has been OOP for a while now.
Top

Calvin the BFI Archive print is almost certainly uncut. BBC also played a 35mm print on TV during the 70s and 80s which may have been uncut. I only saw parts of their broadcast of Scarlet Empress during a visit to London in 1978 but the source looked like a second gen 35mm safety pos. Similar to prints held in Australia at the time. The Oz prints didn't include SHanghai Express. MoMA and one other major US source, (not Eastman House or UCLA) hold nitrates 35mms. I believe it was MoMa's print which was complete and was screened in Oz for the Sternberg retro in 1968.

Your suggestion the footage was cut in 35 sounds as plausible as any I can imagine. The point was at least until the late 80s there was a mixture of pre and post cut prints in circulation. Some of those might or might not have been MCA reissue prints when Wasserman took over the UNiversal library for Television via MCA circa 1962.
Top

David – I've tried emailing you at your bigpond email – no response. Indicator have contacted lots of people on this matter, one of whom contacted you.

The artwork uses original Paramount art from the 1930s. I threw it together. Glad most people like it!
Top

Never got it Nick, anyway Tag is also flummoxed. And others as you know. The best lead has always been the BFI 35mm fine grain. MOMA was the other but they are impossible to deal with.

EDIT: Can you make sure someone corrects the title of the cut song from Devil.
Top

I just wanted to note that although the Criterion does have fewer audiovisual extras, it does have some wonderful essays in the accompanying booklet -- I hope that people don't shortchange those! I'm inclined to purchase this /and/ keep the Criterion set, if my shelf can stand it.
Top

If Indicator can source the missing footage and include it even if it's in a rougher state than the 4k, I'm sure most people wouldn't mind if the release date had to be pushed back a bit.
Top

Fully agree, and if all else fails I'd suggest that they put out a public appeal like they have for Twist Contest. The chances of anybody having a recording are probably slim (and who knows if it was cut or not), but it did have a handful of TV broadcasts in the 60s, 70s and 90s. Indicator have probably noticed as all it took was a quick google, but HTF user Danny Burk responded last year saying there was a good chance he could track it down if need be.

For those unfamiliar with the issue, the cut can be seen at the 18 second mark here and I believe that these are the missing lines:


LILY to CHANG: He claims he has been retired.
CHANG to LILY: Explain to him if he does not tell the truth, I'll have him shot.
LILY to LENARD in French: He says that if you do not tell him the truth, he will have you shot.
LENARD in French, suddenly looking very sheepish: When I was in the army I committed a minor offence and
was discharged.
LILY to CHANG: He has been discharged for a minor offence

One of the problems with the text quoted in the Lorrimer screenplay paperback is they don’t include two lines of dialogue in French both of which Dietrich translates. It occurred to me the reason the French government demanded the cut as being “offensive” was that Chautard clearly details the “shame” and his ruse with the uniform clearly in French. But who the fuck would know.

This is totally à propos, but if anyone is as old as me and remembers, the original MCA 16mm television prints of Blonde Venus were all cut by nearly three minutes, removing the entire German lakeside glade sequence in which she recalls her first meeting with Marshall to Dickie Moore. It was not until June 1978 that I was able to see the movie complete in Paris in a beautiful restored print which was part of one if the very frequent Jo/Marlene tributes at one or other of the then flourishing Rive Gauche revival houses. Venus uncut only seems to have come back into circulation around that time, which one would hazard a guess is around the time Shanghai Express got the cut
Top

Does this mean no reinstated scene on Shanghai Express?
Top

Sadly not. We accessed and checked every element held by the BFI National Archive. We spoke with other archives and archivists, and private collectors. We even examined collections of late filmmakers. But every single reel or master we could lay our hands on had the dialogue removed.
Top

Well thanks for trying anyway!
Top

This arrived this morning. Discs are in digipaks, not Scanavos.
Top

And they’re absolutely gorgeous. I much prefer each film having its own case, rather than two in a case - one inevitably drawing the short straw of being on the back.

The book is a wonder, too - crammed with great artwork and articles (the one on Dietrich’s weight is a jawdropper).
Top

My set arrived this morning (#0016, and now I'm wondering if pH have 15 people of staff I got the first public set

The box design and art is also stunning. I feel as though I came of a bit harsh on it on announcement, it would still makes no sense as a poster for any one single film of theirs (as I understand most Wrigley designed box-set covers to be key art from one film) but knowing of the creation as a representation of all the films it's absolutely gorgeous.
Top

It would be nice to have pictures of the packaging on here.
Top 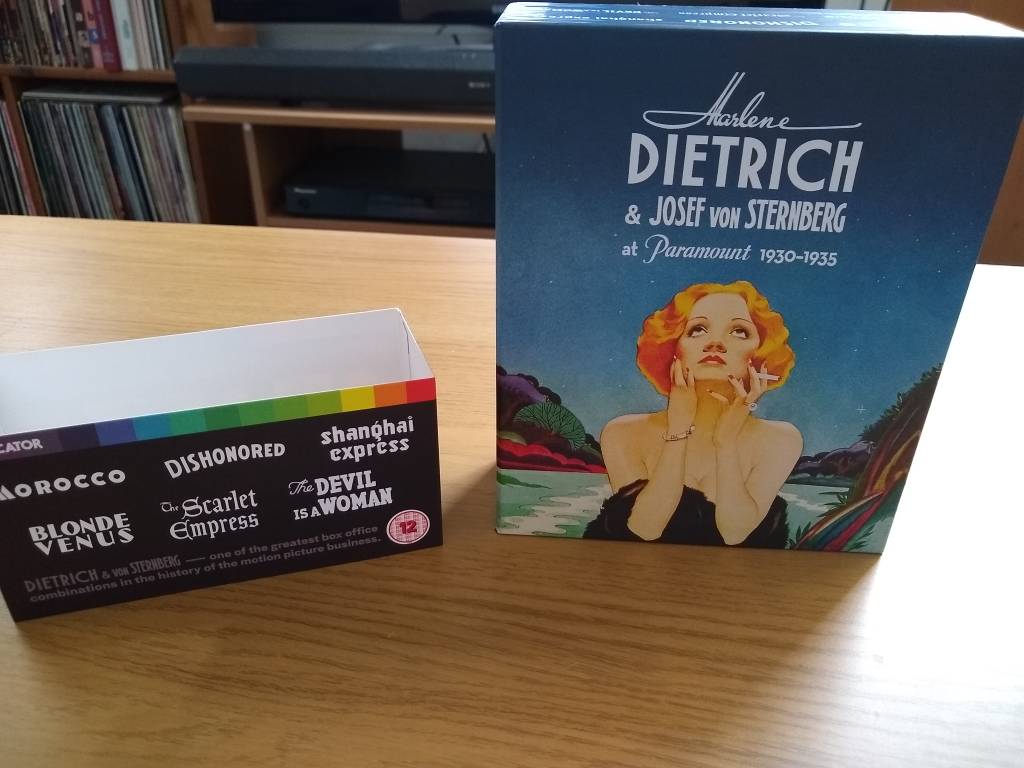 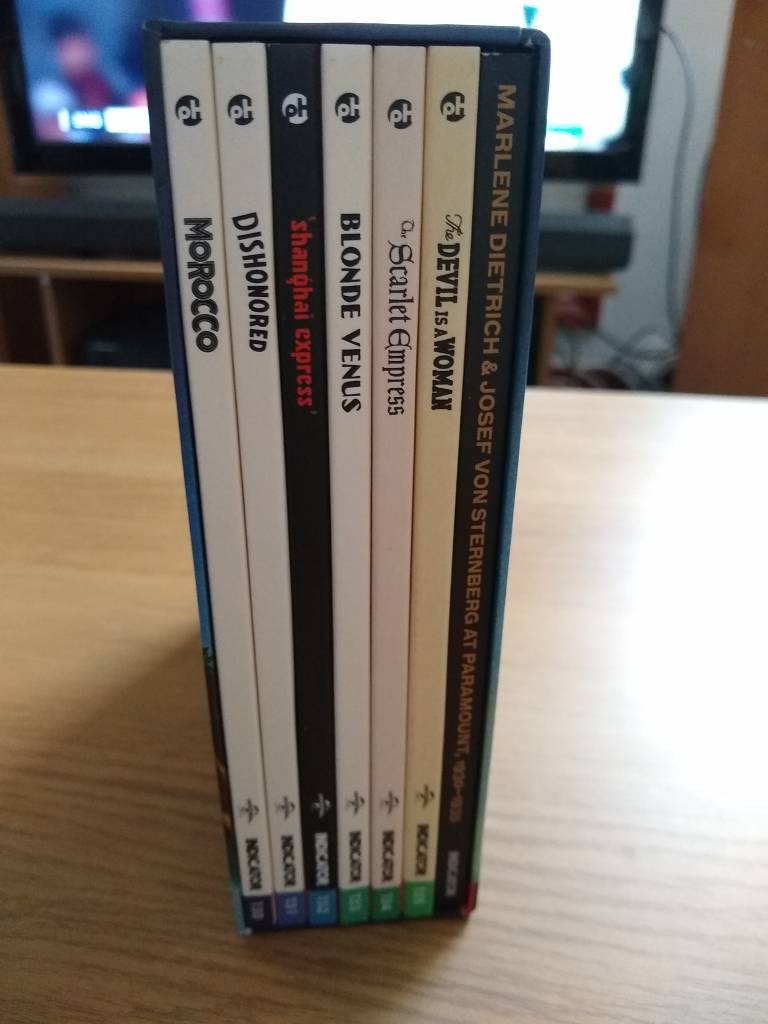 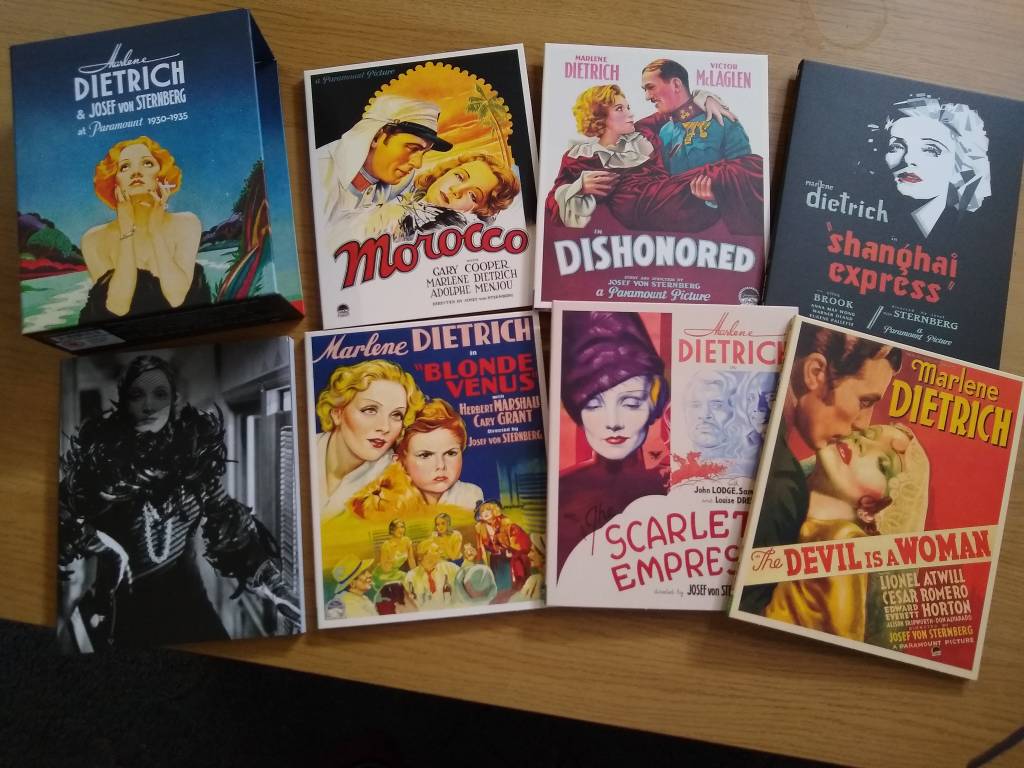 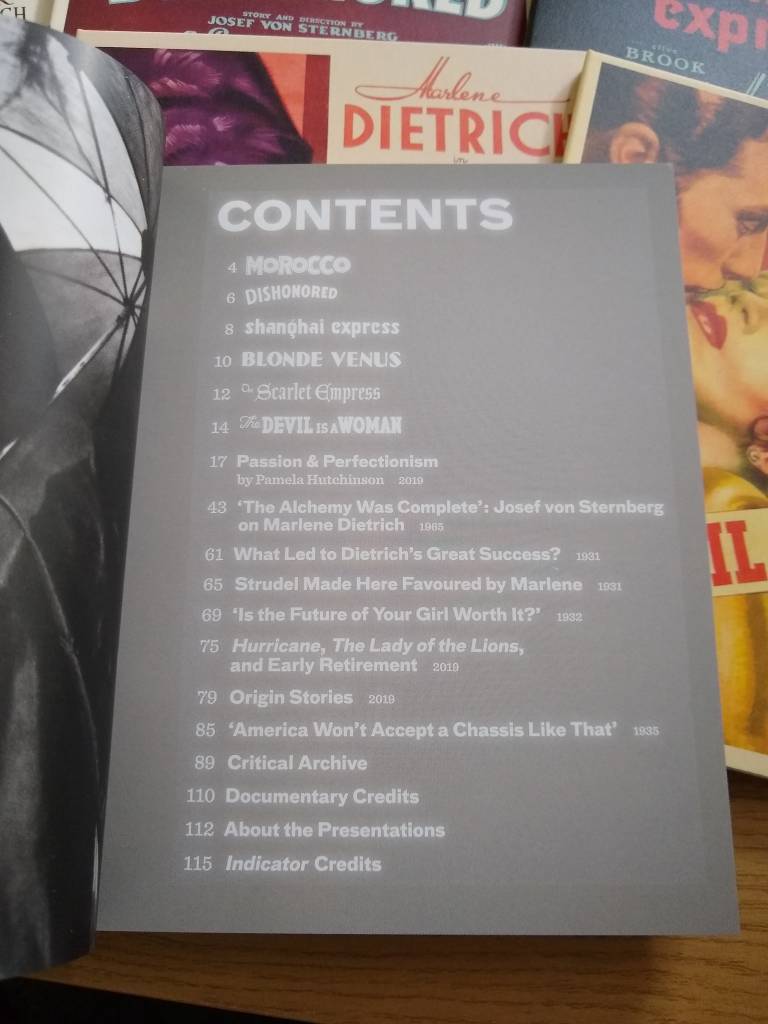 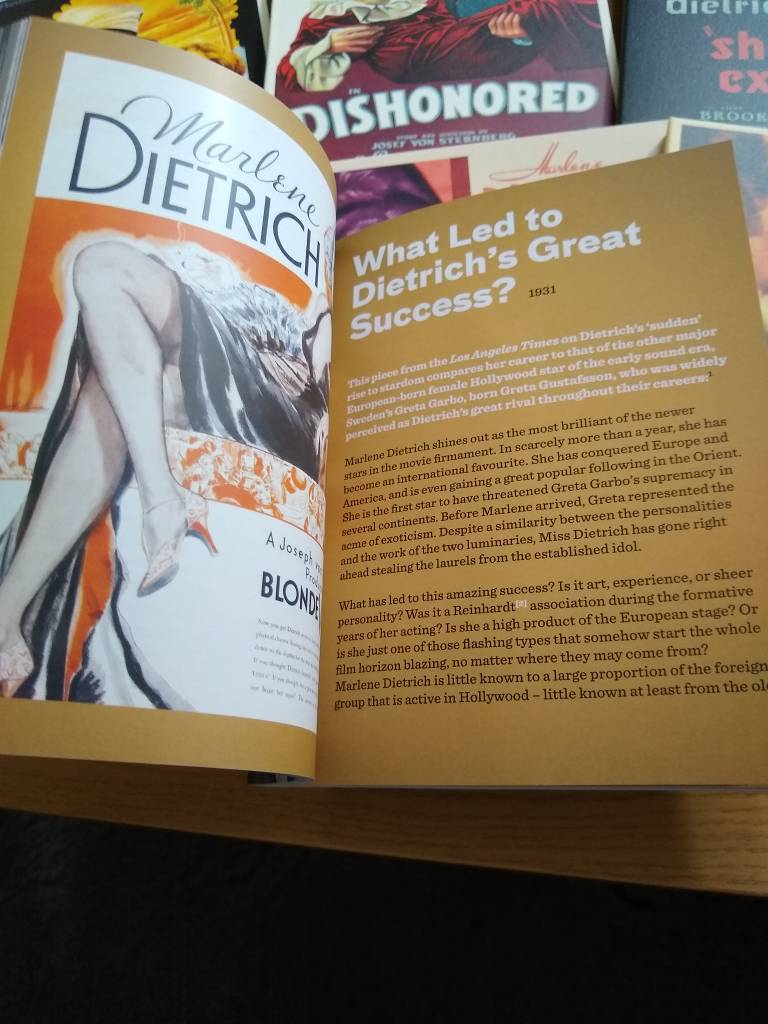 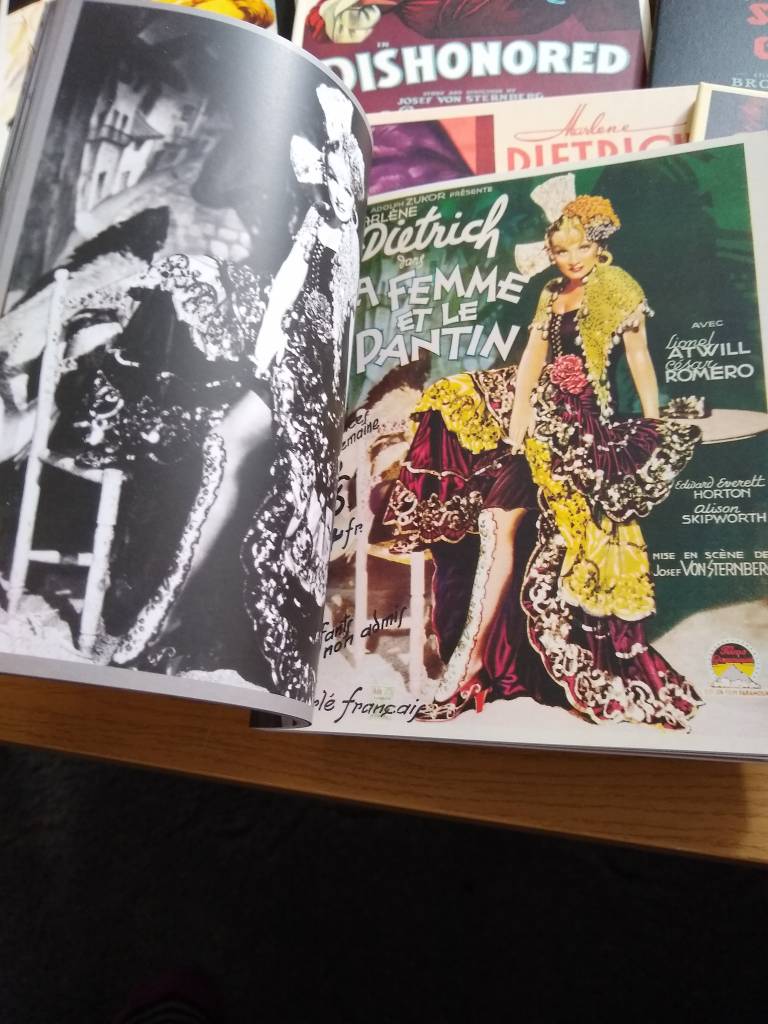 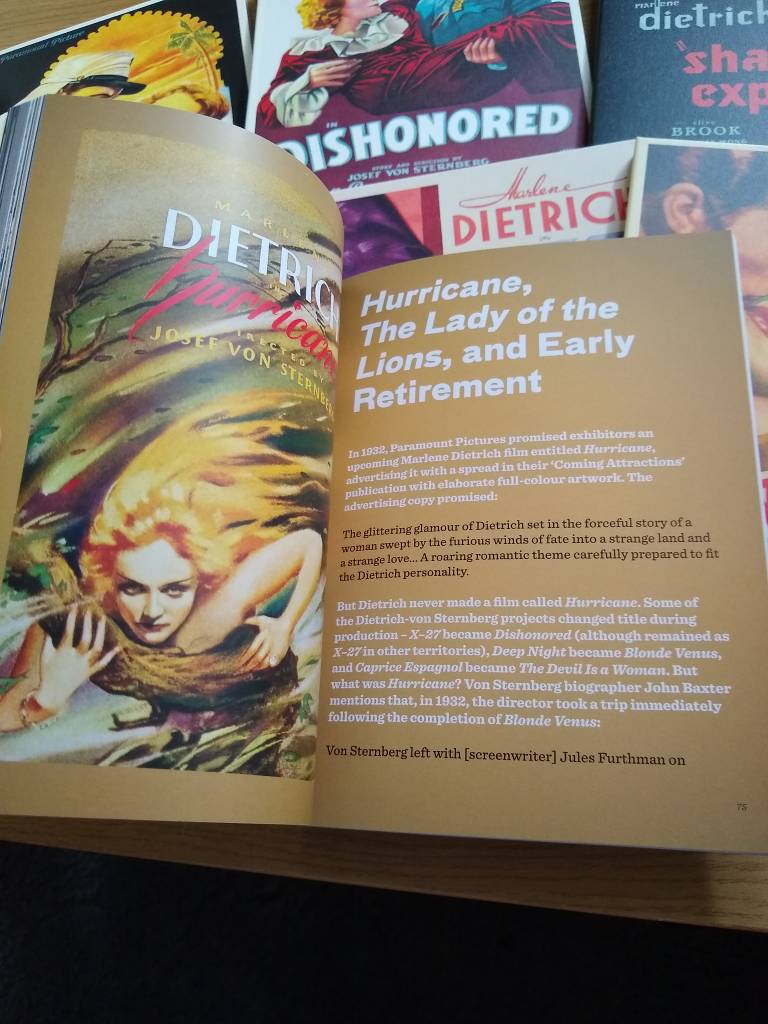