Man of a Thousand Faces

Discuss DVDs and Blu-rays released from Arrow and the films on them.
Forum rules
Post Reply
4 posts • Page 1 of 1
Message
Author

Man of a Thousand Faces 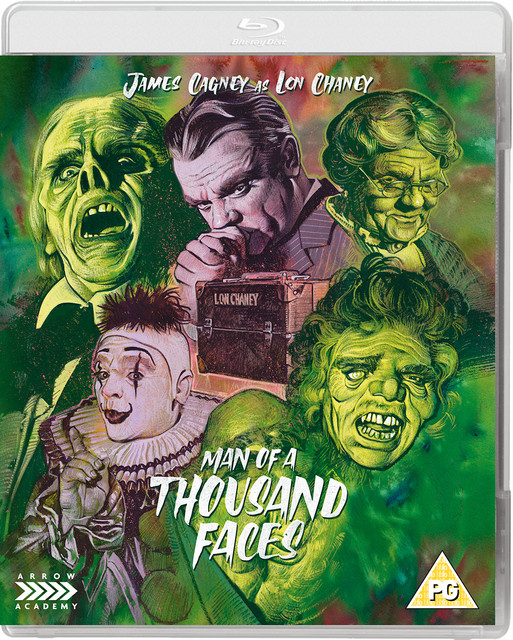 One screen legend pays homage to another in Man of a Thousand Faces, an enthralling biopic which sees Oscar-winning tough guy James Cagney give a multifaceted portrayal of silent cinema legend Lon Chaney.

In early horror classics such as The Hunchback of Notre Dame and The Phantom of The Opera, Lon Chaney captivated audiences with his vivid personifications of grotesque and afflicted characters. His extraordinary make-up skills, and miraculous ability to completely transform into grisly yet sympathetic and tragic monsters, garnered him international acclaim and the famous moniker of this film’s title.

Yet, despite his talent and success, Chaney led a life plagued by hardship and heartache. This insightful film-portrait traces the trajectory of the actors’s career: from impoverished vaudeville clown to Hollywood stardom, whilst also capturing the drama that surrounded his private life. The film is presented here for the first time in dazzling High Definition, with a selection of revealing extras.

I have not seen this so am curious whether it bears any comparison to the other Cagney portrait of a vaudeville performer, George M. Cohan in Yankee Doodle Dandy.
Top

If you're familiar with Chaney's actual life, this plays loose with the facts, but it's enjoyable enough. Worth it just for Cagney and Robert Evans in a bit part as Irving Thalberg. I do remember it having quite lovely CinemaScope photography, despite it being a bit odd of a choice for a biopic on a silent era actor.
Top

colinr0380 wrote: ↑
Fri Jul 12, 2019 11:33 am
I have not seen this so am curious whether it bears any comparison to the other Cagney portrait of a vaudeville performer, George M. Cohan in Yankee Doodle Dandy.

Well, that was a good movie, so none at all. Apologies to the previous poster, but this is a staggeringly awful biopic with zero to offer. The sickly-looking Cagney's limited ability to emulate Chaney's various guises even with decades of "improved" makeup at his disposal is the least of this melodramatic sludge-pit's problems.

Are there any vaguely horror-related releases these days that don't feature contributions from Tim Lucas and Kim Newman?
Top
Post Reply
4 posts • Page 1 of 1

Return to “Arrow DVDs and Blu-rays”