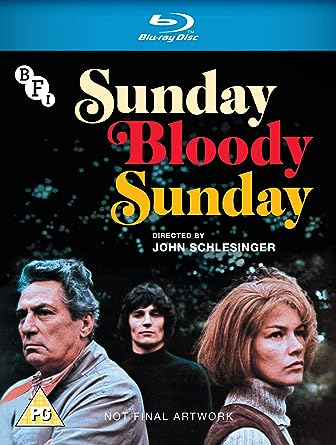 A recent divorcée (Jackson) and middle-aged Jewish doctor (Finch) find themselves embroiled in a progressive love triangle with a bisexual artist (Murray Head). Both discover a new freedom with their young lover, as they confront the convention and obstacles that have defined their lives.

An exploration of middle-class life and permissiveness in 1970s London, its depiction of homosexuality changed the landscape of LGBTQ+ representation on screen. Featuring outstanding BAFTA-winning performances by Finch and Jackson, Sunday Bloody Sunday is a tender and complex view on the politics of love, lust and longing.

Presentation in High Definition
The Pacemakers: Glenda Jackson (1971, 14 mins): a documentary profile of the actress Glenda Jackson, including footage of the actress performing on the set of Sunday Bloody Sunday
**FIRST PRESSING ONLY** Fully illustrated booklet with new writing on the film and full film credits
Other extras TBC