Discuss DVDs and Blu-rays released by Eureka/Masters of Cinema and the films on them. If it's got a spine number, it's in here.
Forum rules
Please do not clutter up the threads for MoC titles with information on pre-orders. You can announce the availability of pre-orders in the MoC: Cheapest Prices / Best Places to Buy / Pre-Orders thread. Any posts on pre-orders in any other thread will be deleted.
Post Reply
75 posts
Message
Author 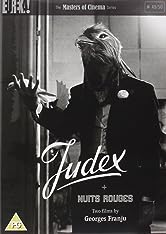 The magical, rarely seen Judex directed by the great Georges Franju (Eyes Without a Face) was largely unappreciated at the time of its release in 1963. This lyrical and dreamlike picture, a putative "remake" of Louis Feuillade's own 1916 Judex, is as evocative of the silent master's own works as it is the later films of Jean Cocteau and Salvador Dali. A French reviewer wrote in 1963: "The whole of Judex reminds us that film is a privileged medium for the expression of poetic magic".

Starring the magician Channing Pollock, the divine Edith Scob, and the mesmerising Francine Bergé, Judex concerns a wicked banker, his helpless daughter, and a mysterious avenger. It plays like a fairy tale, one in which Franju creates a dazzling clash between good and evil, eschewing interest in the psychological aspects of his characters for unexplained twists and turns in the action. The beautifully controlled imagery, superbly rendered by Marcel Fradetal's black-against-white photography, animates a natural world and the spirits of animals all at war with a host of diabolical forces.

Nuits Rouges [Red Nights] released in the UK as Shadowman was the second Franju Champreux meditation upon the films of Feuillade. It aggressively escalates a pulp atmosphere steeped in shocking turns of events to an even more vertiginous level. Here, the object of pursuit is the fabled treasure of the mythical order of the Knights Templar, which the filmmakers use as the jump-off point for staging a series of fantastic set-pieces. As the Fantômas-esque arch-criminal (known only as "The Man Without a Face", played by Jacques Champreux himself) violently pursues the treasure, the action intensifies amongst a cadre of post '68 bohemians, the Paris police bureau, and a cult of cowled conspirators.

Franju's Judex and Nuits Rouges both paid overt homage to the surreal, silent serial-works of Feuillade. Scripted in collaboration with Feuillade's grandson, Jacques Champreux, these films evince the same poetic magic that made the art of that earlier master a cause célèbre not only for the Surrealist movement, but also for the world renowned Cinémathèque Française. It was the Cinémathèque (co-founded by the legendary Henri Langlois with Franju) that helped resurrect the reputation of Feuillade decades after he'd slipped out of the public consciousness. The Masters of Cinema Series is proud to present Georges Franju's two most mindbending films on DVD in the UK for the first time.

I am really looking forward to this release, a look at screengrabs from the Cahiers disc here and both films look great!

With regards to supplements will anything be ported over from the Cahiers disc?
Top

Sounds like an interesting release. Didn`t know the titles but I looked them up and sound worthy of a watch for sure.
Top

This is the type of out of nowhere but really exciting release that Criterion should be doing on a monthly basis. Great job, Nick and company.
Top

Yes, very nice to see "Judex" finally on disc. I never heard about "Nuits rouges", but a quick look at imdb assures me that this is possibly an ideal combination. Has anyone seen that latter film?
Top

Glory be! Both films were high on my list. 2008 is shaping up to be a great year for MoC.
Top

Judex has been on DVD from Flicker Alley for quite a long time.
Top

Judex has been on DVD from Flicker Alley for quite a long time.

But a good reminder that I still have to see the silent version. I hope (nay, I'm sure) MoC will include a nice essay about the relation between the two versions and Franju's motivation and ideas about this hommage to Feuillade.
Top

Very good news indeed, but the package is missing two more DVDs to include the 8 x 52' TV mini-series L'HOMME SANS VISAGE, filmed by Franju at the same time as the feature film NUITS ROUGES, using the same actors playing the same characters. I've only seen the feature film (many, many years ago) and would love to see the TV series.

In fact I'd favor a stand-alone for JUDEX (plus JUDEX-related extras) and a 3 or 4 disc box for NUITS ROUGES / L'HOMME SANS VISAGE.

For more info on the TV series, see here (in French)
Top

Especially since I missed the Franju circuit at the Anthology.
Top

But a good reminder that I still have to see the silent version. I hope (nay, I'm sure) MoC will include a nice essay about the relation between the two versions and Franju's motivation and ideas about this hommage to Feuillade.

D'oh! A little voice told me not to comment. I should have listened to it!

Franju is fabulous. I have watched Tete Contre les murs and Sang des betes that I especially liked (along with others), so this is good news. Bringing it all back to Flicker Alley I have to watch Franju's Le Grand Méliès (1952) that is on their Méliès set. I want to wait until I have finished all the actual Méliès and then watch that, but maybe I'm being silly. Anyway, Franju is always fantastic release news!
Top

Donald Trampoline wrote:Bringing it all back to Flicker Alley I have to watch Franju's Le Grand Méliès (1952) that is on their Méliès set. I want to wait until I have finished all the actual Méliès and then watch that, but maybe I'm being silly.

Well, there must be a reason for Flicker Alley programming Le Grand Méliès so that it's the first thing that you see when you watch the entire set...
Top

Any chance the short Hotel des Invalides is going to get thrown in as well as a bonus feature? It's maybe Franju's best film and there are no other DVD releases upcoming in the foreseeable future.
Top

Carping about artwork aside, this is a magnificent release and here's hoping for a boatload of extras that exceed the Cahiers release. Thanks Nick and co.
Top

And to all who have held back from the Feulliade-- do Flicker Al & yourself a favor and treat yourself to a freaky phantasmatic release. The original superhero!
Top

Right after I break down and go see that bleary 16mm print at Anthology, of course.

Apart from not anticipating my timing on that, an excellent choice, MOC, and I'm looking forward to finally getting my first exposure to Nuits Rouges.
Top

So what's the time between announcement and actual street-date for MoC? Is it approx. three months (like Criterion) or usually longer?
Top

The Eureka website lists it as August. So along with Vampyr, a pretty exciting month for MoC to say the least.
Top

A trying month for my wallet! This is a sure buy, along with every other August release. Better start saving now. And *cheers* to Wrigley and team for taking on more Franju! Eyes Without A Face has to be one of my favorite blind buys from Criterion.
Top

I think this is the most pleasing announcement yet from MoC for me personally. I love Judex and have never seen a decent presentation of it. Nuits Rouges will be new to me, but it sounds right up my alley.
Top

It can be preordered from Play.com!
Top
Post Reply
75 posts