Discuss DVDs and Blu-rays released by Eureka/Masters of Cinema and the films on them. If it's got a spine number, it's in here.
Forum rules
Please do not clutter up the threads for MoC titles with information on pre-orders. You can announce the availability of pre-orders in the MoC: Cheapest Prices / Best Places to Buy / Pre-Orders thread. Any posts on pre-orders in any other thread will be deleted.
Post Reply
13 posts • Page 1 of 1
Message
Author 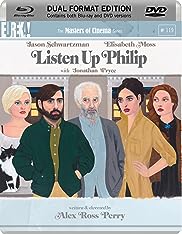 Combining intellectual ambition with a singular comic sensibility, the third feature film by writer-director Alex Ross Perry marked a defining moment for the American independent cinema of the 2010s. As with his previous features Impolex and The Color Wheel, the blackly hilarious Listen Up Philip is distinguished as much by its literary pedigree as by its fine attunement to atmosphere, sense of place, and, enabled by the camerawork of Sean Price Williams, the texture of the image.

Jason Schwartzman, in one of his most accomplished roles since such Wes Anderson collaborations as Rushmore and The Darjeeling Limited, achieves the height of comic verbal violence as the novelist Philip Lewis Friedman who, having received his first taste of literary acclaim, embarks upon the publicity campaign for his soon-to-be-published second novel, Obidant. The attention of his literary hero Ike Zimmerman (played by the first-rate Jonathan Pryce), a major novelist some decades his elder, leads to an open invitation to abscond from Brooklyn and work from Zimmerman's small-town home upstate. And so the stage is set for all-out warfare between Philip's seemingly irrepressible ego and the emotionality of his talented photographer girlfriend Ashley who, in a brilliant performance by Mad Men's Elisabeth Moss, exhibits the kind of dynamism that could dull Philip's edge for good.

Put into relief by a cast including Krysten Ritter, Joséphine de La Baume, Keith Poulson, Kate Lyn Sheil, and Bree Hemingway, Schwartzman-as-Friedman embodies what must be one of the most charmingly loathsome or most diabolically winning personalities in recent films. The Masters of Cinema Series is proud to present Listen Up Philip, the picture Manohla Dargis of The New York Times called ''a masterwork about what it is to live for love and not just the self,'' in its UK debut on Blu-ray and DVD in a Dual Format edition.

• New 1080p transfer of the film on Blu-ray, with a progressive encode on the DVD
• Optional English subtitles for the deaf and hard-of-hearing
• Half Price: A Conversation Between Alex Ross Perry & Sean Price Williams, a 65-minute film created exclusively for this release
• The Making of Listen Up Philip
• Feature-length audio commentary with Alex Ross Perry
• Exclusive interview with designer Teddy Blanks
• Jason (and Sean) vs. the Police
• Deleted scenes
• Theatrical trailer
• 44-PAGE FULL COLOUR BOOKLET featuring a director's statement; all the Ike Zimmerman book jacket covers seen in the film, accompanied for the first time by the books' respective synopses written by Perry and Blanks; and behind-the-scenes imagery
Top

repeat wrote:Fantastic news from MoC: Listen Up Philip announced on DVD and Blu for next year. Hope they'll manage to fit The Color Wheel on there as an extra!

Indeed, with this and Dragon Inn coming out I am very excited for the new year and Eureka releases! Hadn't thought about them including The Color Wheel as an extra - that would be an excellent decision as it's not too long and I haven't seen the film yet! I would love for them to add it even if it was just in SD (though knowing Eureka they would definitely go for HD first).
Top

According to the Amazon listing this is definitely a Masters of Cinema title, and is also Dual Format (despite there being a separate DVD release...that is unless they're cancelling the DVD). Also confirmed as MoC by being mentioned on the Masters of Cinema Twitter page.
Top

not an awful film, but is quite a mess.
to call it, or the director a master of anything is just silly.
i did like the commentary on the last 2minutes of the film, even though it didn't really seem to have anything to do with the 90minutes that preceeded the said commentary.
and The Color Wheel is nothing but a better than average mumblecore.
Top

• New and exclusive video conversation between director Alex Ross Perry and cinematographer Sean Price Williams
• New and exclusive video interview with graphic designer Teddy Blanks, the creator of the Zimmerman and Friedman book jackets featured in the film
• Feature-length audio commentary with Alex Ross Perry
• Original theatrical trailer
• The Making of Listen Up Philip
• Jason & Sean vs The Cops
• 36-page full-colour booklet containing writing on the film and full-colour reproductions of the Zimmerman and Friedman book jackets, accompanied by never-before-published synopses of each novel written by Perry
Top

Another of the myriad indie films about an insufferable asshole, this one at least has the benefit of going whole hog on the idea and making Jason Schwartzman a truly intolerable prick without any hope of redemption. However, like many of the "New York" novelists whose work has inspired both the characters and the content of this film, this movie is too in love with its asshole protagonist, too convinced of its boilerplate insights, incapable of portraying its women with the same observational focus it gives the men, and there is a pathetic degree of wish-fulfillment present in the Red Pill-ish constant of beautiful young women (including, briefly, Dree Hemingway from Starlet) lining up to fall head over heels with a jerk. This is a frequently funny, well-made and handsomely-produced film, but I've just seen/read this kind of thing too many times. MoC has given it a deluxe treatment, so those more receptive will have a lot to cherish here, but I found my estimation of the film waning as it went on til it ended and all I could muster was an echo of Elizabeth Moss' final kiss-off.
Top

Schwartzman's character is insufferable but not developed enough to turn that into an interesting character trait. Most of the scenes were lifeless and talkative. Elisabeth Moss was the only one shining while Schwartzman was pretty much sleepwalking through a role he seems to play variations of in every one of his films.
Top

I'll have to agree with Domino above. I think the main thing separating this from The Color Wheel though is that there's no one to really punch against Philip the way the siblings there could fight each other. Ritter looks to be that, but is unfortunately sidelined for some reason that makes me with Lynn Shelton was involved in some way.
Top

Sorry to side track this but is anyone aware of a planned Blu Ray release in the UK for Golden Exits, which I'm probably alone in thinking is easily Alex Ross Perry's best film to date.

I purchased a US DVD from Sony but it turned out to be a DVD-R and the picture quality was less than stellar.

Seems so strange that this titles hasn't gotten anywhere near the exposure of his other films. Its certainly the most accessible and has a great cast to match its smart screenplay. Suppose I should be grateful to have seen it on the big screen in the first place.
Top
Post Reply
13 posts • Page 1 of 1