This 1987 Sandy Howard production was requsted many times from the fans of film durling the DVD era.

Getting in for Blu-ray is pretty tough.

this is why started a gofundme so people can donate $$$$ funds to order for this motion picture.

any USA customer donate $30, will get a BluRay disc of BLUE MONKEY !!!!

I'm sure this will have no problem reaching its goal of *takes long look at card* FIFTY-THOUSAND DOLLARS.
Top

The plot of Blue Monkey:


Detective Jim Bishop and Dr. Rachel Carson must find a way to stop a giant monstrous insect that's eating people in her quarantined hospital before it procreates and spreads a deadly infection it's carrying.

I love trash cinema. I love it. But I won't pay thirty dollars on someone with this reputation in a crowd funded project. I cannot fathom anyone asking for $50,000 in a crowd funding campaign for something like this unless it was a scam. He might as well put a disclaimer up saying "NOT A SCAM" at this point.
Top

Doesn't GoFundMe keep the money regardless of whether it gets funded? Surely a great idea!
Top

GoFundMe is a very strange platform for this kind of crowdfunding. For one thing, it's not designed with rewards in mind in the same way that something like Kickstarter or Indiegogo are - hence, people commenting with their mailing addresses.
Top

Detective Jim Bishop and Dr. Rachel Carson must find a way to stop a giant monstrous insect that's eating people in her quarantined hospital before it procreates and spreads a deadly infection it's carrying.

I like to imagine there will be a scene toward the end of the movie when Carson finally says, "All right, fine, we can use a DDT bomb to kill the giant insect monster! Along with every bird species in the area. Happy now?" And then Jim Bishop stars rambling about presidential assassinations.
Top

respond so far downright nasty. Movie is not worth $25 + shipping? but other label can get $150,000? i never begged for money, but way too many people tell me this is the quickest way to get product out there. this idea wa stupid and cancelled.

Lasted all of 17 hours before Bill threw his toys out and cancelled it.
Top

He's now claiming he didn't even make the GoFundMe, so he can't refund people. Suuuuuuure
Top

It's like a Moebius ribbon made in the Twilight Zone. It's hard to tell if it's real or false, or wait no it's real, or maybe not...
But in the end, nope, pretty real since Bill himself seems to have posted about it on FB.
I'm now just watching the blu-ray.com's Code Red thread melting down at realising how they might have given Bill way too many passes in the past.
Top

You know when I said it was probably a scam I meant it in a light hearted tone. But it's great to feel vindicated...I guess?
Top

I mean, it's still a scam, just one perpetrated by the labelhead
Top

I feel like this saga will end with Bill taking hostages.
Top

I mean, even in the best and most well managed cases, isn't crowdfunding literally begging for money?
Top

colinr0380 wrote:I mean, even in the best and most well managed cases, isn't crowdfunding literally begging for money?

Not really, because the usual begging process implies no subsequent return for the donor (aside from the abstract one of being happy to have supported your fellow man/woman at a time of need).

By contrast, with every crowdfunder I’ve contributed to, I’m essentially purchasing a tangible product - the only difference being that there’s often a fair gap between me spending my money and actually receiving what I paid for.

And quite a few crowdfunders came about as a means of testing the commercial water. Take the Scala Cinema book, for instance - this was clearly going to be an exceptionally expensive proposition, as reproducing all the cinema’s legendary programmes at a size appropriate for comfortable browsing dictated an extremely large hardback volume. FAB Press had no idea whether there’d be enough of a market to justify this outlay, so they essentially set up a preorder system, and once a minimum number of orders had been received, the project would go ahead (which thankfully has happened). I certainly don’t consider that “begging”, unless all forms of soliciting any kind of investment can be described as such.
Top

As expected, the blu-ray.com Code Red thread has already moved on to another topic, because who cares about a label scamming people.
Going back at trying to find out exactly how it ended, I stumbled upon this pearl from nobody else than Blu Titan :

That post should probably be offline but is a classic moment.

Meanwhile, the GoFundMe looks to still be open for donations.

Fascinating stuff. I'm absolutely amazed by how many pass Bill is getting ther.
Top 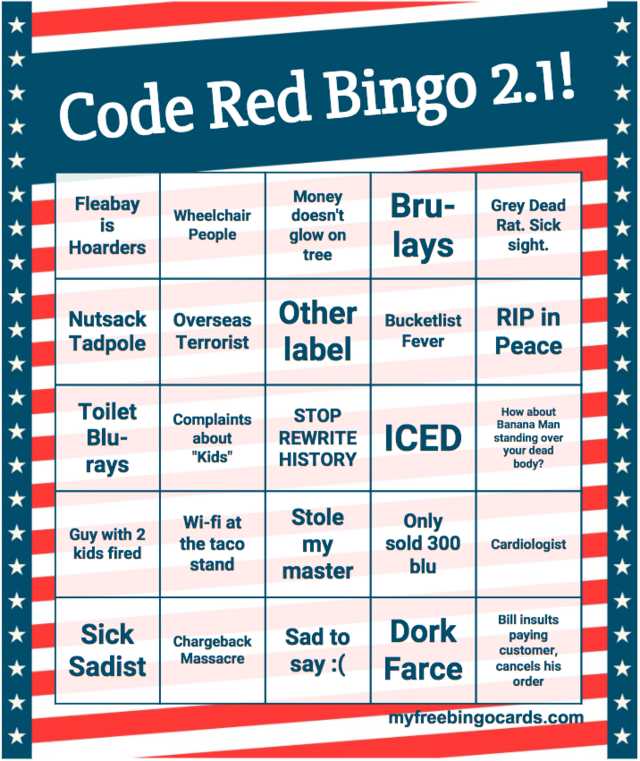 This reads like a fourth season of Twin Peaks.
Top

Code Red Guy threw a tanty and deleted his Big Cartel site, the only place to purchase like 95% of his inventory (with often notoriously long wait periods for shipping)

EDIT: His brother mentions downthread that he also left the hospital where he was convalescing against his doctors' orders, so poor decision-making appears to be a widespread issue there
Top

The guy that runs Dark Force Entertainment (the other place to buy Code Red titles) livestreamed Bill Olsen in the hospital. And it was, uh, something, seeing ol' crazypants complaining while laying half on/half off a hospital bed with that bananaman costume pulled over his head.
Top

He probably is mentally disturbed so treating him as a geek show is a bit gross.
Top

That's a NSFW link FYI. That being said what the hell is he doing?
Top

domino harvey wrote: ↑
Mon Dec 10, 2018 1:19 pm
Code Red Guy threw a tanty and deleted his Big Cartel site, the only place to purchase like 95% of his inventory (with often notoriously long wait periods for shipping)

EDIT: His brother mentions downthread that he also left the hospital where he was convalescing against his doctors' orders, so poor decision-making appears to be a widespread issue there

So it appears it wasn't Bill Olsen's decision to shut down the Big Cartel site. Turns out that he (and the Dark Force Big Cartel, which has also been shut down) were still selling the Andy Milligan releases, even though his rights have expired. Severin (who now has the license for them) and Films Around the World (the licensor) complained and when they didn't pull them, Big Cartel shut them both down.
Top

I wish I had come across this thread before ordering from Code Red's site.

I placed an order 2 weeks ago. Just a single Blu-Ray -- John "Bud" Cardos's awesome "Mutant" -- and I still haven't received it. Oh, and they assured me the title was currently in stock before I placed the order.

I emailed them yesterday, and I got a real rude response saying "I packaged it! Track it through PayPal!" Well, all it says is a package label has been created for it, and it *still* hasn't made it to a USPS facility yet.

You know, if your company is in financial trouble, hey, promptly shipping out an item is the easiest thing you can do to keep a customer satisfied. There were 4 other titles I was going to purchase from them. "Mutant" was a trial run to see how they handle this kind of thing. Well, they've failed, and I will *not* be ordering those other titles.

For what it's worth, shipping can be pretty slow this time of year. I recently dropped some packages off at the post office and the tracking didn't update as received for over a week.
Top
Post Reply
192 posts