Discuss DVDs and Blu-rays released by Criterion and the films on them. If it's got a spine number, it's in here. Threads may contain spoilers.
Post Reply
14 posts • Page 1 of 1
Message
Author 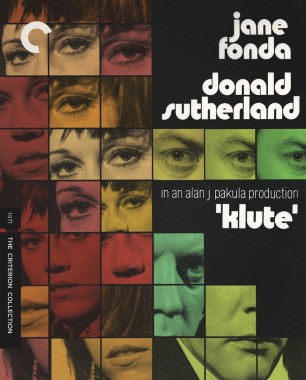 With her Oscar-winning turn in Klute, Jane Fonda arrived full-fledged as a new kind of movie star. Bringing nervy audacity and counterculture style to the role of Bree Daniels—a call girl and aspiring actor who becomes the focal point of a missing-person investigation when detective John Klute (Donald Sutherland) turns up at her door—Fonda made the film her own, putting an independent woman and escort on-screen with a frankness that had not yet been attempted in Hollywood. Suffused with paranoia by the conspiracy-thriller specialist Alan J. Pakula, and lensed by master cinematographer Gordon Willis, Klute is a character study thick with dread, capturing the mood of early-1970s New York and the predicament of a woman trying to find her own way on the fringes of society.

• New, restored 4K digital transfer, supervised by camera operator Michael Chapman, with uncompressed monaural soundtrack on the Blu-ray
• New conversation between actors Jane Fonda and Illeana Douglas
• New documentary about Klute and director Alan J. Pakula by filmmaker Matthew Miele, featuring scholars, filmmakers, and Pakula's family and friends
• The Look of "Klute," a new interview with writer Amy Fine Collins
• Archival interviews with Pakula and Fonda
• "Klute" in New York, a short documentary made during the shooting of the film
• PLUS: An essay by critic Mark Harris and excerpts from a 1972 interview with Pakula
Top

I guess it was too much to hope for the Pakula-Fonda 1981 misfire "Rollover" as a special extra feature.
Top

It not being included is the bonus
Top

[Spending 12 hours painstakingly arranging the lighting in my living room in honor of this announcement.]
Top

It's the only Pakula I have left so I would have appreciated the free way to attain it.
Top

Looks superb, matches what I saw in 35mm recently.
Top

I’ve already ordered this from B’n’N and cannot wait for its arrival. One of my absolute favourites of the 70s. Fonda is something astonishing in the title role and the sense of dread it generates is unbelievable. The first time I viewed it, my expectations were too caught up in what I expected it to be; some sort of convoluted thriller of some type. Rather, the beauty comes from its character study rather than any interest in a McGuffin or the type. The scene where Klute investigates the basement is utterly terrifying and that and the entire film remains a real testament to the cinematography and direction of the film. But this is a document to Fonda’s powerhouse of a performance and the type of willingness of realism and darkness that Hollywood seemed to explore for a short period of time. I’ve been waiting for its arrival on blu for a long time.
Top

bdsweeney wrote: ↑
Thu Jul 04, 2019 10:13 am
The first time I viewed it, my expectations were too caught up in what I expected it to be; some sort of convoluted thriller of some type. Rather, the beauty comes from its character study rather than any interest in a McGuffin or the type.

Same here. I was rather underwhelmed after my first viewing because I had expected a tense, gritty thriller about a killer stalking a woman. Obviously, I hadn't informed myself about the movie very well - in my misguided imagination, it was supposed to be something more akin to an awards-friendly John Carpenter than Alan J. Pakula. Thankfully, it is indeed character- and mood-oriented, which means its relative lack of thrills is not important, and therefore the replay value is higher. Fonda's Bree is a fascinating creation. I'll be adding the Criterion edition to my collection someday.
Top

I don't know if this has been posted before but the disk contains an easter egg: A full episode from a 1978 Dick Cavett show with Pakula as guest.
Top

Does it require that any extra antics be utilized to access it, or is it just in the supplements menu?
Top

I have just checked it again and it seems that I was wrong. It is not an easter egg but one of the "archival interviews".
Top

I have just checked it again and it seems that I was wrong. It is not an easter egg but one of the "archival interviews".

You’re right, it is one of the extras. There’s also a lengthy Jane Fonda interview, who clearly remains a huge fan of the film, and speaks warmly of Pakula and the experience of working on the film. I’m so glad I have finally got this on blu ray, as it has always been a big favourite, ever since I saw it on the BBC back in the late 70s, and my favourite of the so called “paranoia trilogy”. A Criterion blu ray of The Parallax View would be very welcome.
Top
Post Reply
14 posts • Page 1 of 1